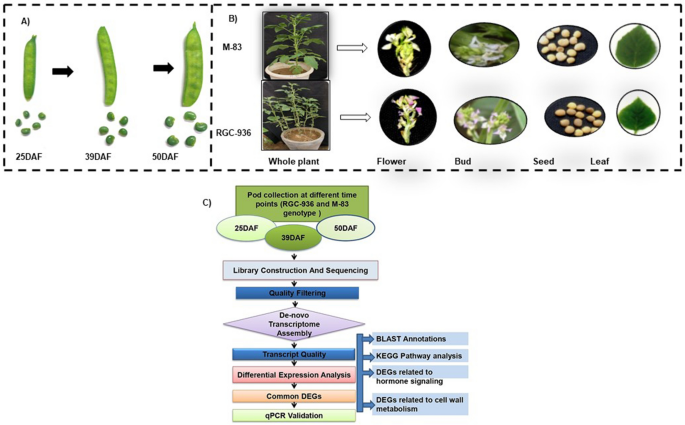 No ESTs related to Phosphomannoisomerase (EC 5.3.1.8) were detected in any of the developmental stages studied. However, nine unigenes which resembled phosphomannomutase (EC 5.4.2.8) (catalyses the reversible conversion of D-mannose 6-phosphate to α-D-mannose 1-phosphate) were identified at 25DAF, while eleven such unigenes were found at 39DAF and nine unigenes at 50DAF. GDP-D-mannose and UDP-D-galactose, the direct precursors for galactomannan biosynthesis are synthesized by enzyme GDP mannose phosphorylase (EC 2.7.7.22) and UDP-galactose 4-epimerase (EC 5.1.3.2) respectively. A total of 27, 33, and 26 unigenes of UDP-glucose-4-epimerase were detected at 25DAF, 39DAF, and 50DAF respectively, while 9 unigenes were observed for GDP-mannose transporter at 25DAF and 21 unigenes at both 39DAF and 50DAF stages.

MeV software was used for Hierarchical Clustering Analysis (HCA) of DEGs according to their transcription profile. The HCA was performed to see the distribution of DEGs present in the transcriptome data at three pod development stages. Interestingly, we found that the highly expressed genes (indicated by red color) showing annotation of the important genes involved in galactomannan biosynthesis are grouped in cluster II mainly at mid and late development stages in RGC-936 (Fig. 4C). No expression was observed at 25DAF in both the genotypes.

A total of six RNA samples with two biological replicates each were isolated from pod tissues at different developmental stages (25DAF, 39DAF and 50DAF) from RGC-936 and M-83. The expression profile of the enzymes directly related to galactomannan biosynthesis was validated by RT-PCR at 39DAF in RGC-936 which correlated well with in-silico data, except for sucrose synthase which showed higher expression in M-83 at 39DAF. The relative expression of α-galactosidase, mannan synthase, glycosyltransferase, cellulose synthase, Mannan endo 1,4 β mannosidase, and phosphomannomutase were found to be significantly higher at 39DAF and 50DAF in RGC-936 as compared to M-83 (Fig. 5). For sucrose synthase, relative expression was found to be 5.4-fold at 39DAF and 0.9-fold at 50DAF in RGC-936, while it was 39.9-fold at 39DAF and 0.8-fold at 50DAF in M-83 (Fig. 5).

Scanning electron microscopy (SEM) micrographs of the mature seeds showed larger cuticle structure with more space in RGC-936 as compared to smaller cuticles in M-83. Further, the mature seed coat of RGC-936 (Fig. 6) in surface view showed epidermal as well as hypodermal wall thickenings underneath, a well-defined sub-epidermal layer, and a larger endosperm than M-83. RGC-936 had thicker seed coat (163.8 µm), rich in protein bodies with compact and uniform distribution of aleuroplast cells, and contained a greater number of globoids as compared to M-83 which had moderately thick (158.8 µm) seed coat, scattered aleuroplast, large number of oil bodies and intracellular spaces due to the larger vacuole. The starch content was lower in M-83 seeds with a greater number of oil bodies as compared to RGC-936.