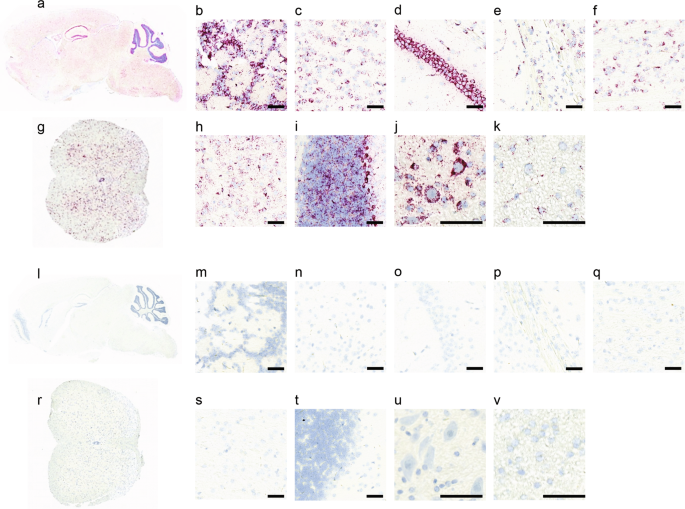 H11-Cas9 mice on C57BL/6J [B6J.129(Cg)-Igs2tm1.1(CAG-cas9*)Mmw/J; stock #028239; laboratory of M. Winslow, Stanford University, Stanford, CA] [25] constitutively expressing Streptococcus pyogenes Cas9 (Cas9) were purchased from Jackson Laboratory (Bar Harbor, ME). Homozygous H11-Cas9 mice were crossed to generate animals used in all experiments of this study. Mice within litters were randomized for the treatment groups. Experimenters were blinded to treatment. Animals were euthanized and excluded from tissue processing or further analysis if they exhibited hydrocephalus. All animal use and treatments were approved by the Biogen Institute Animal Care and Use Committee and followed the National Institute of Health Guide for the Care and Use of Laboratory Animals.

The sgRNA design for mouse NeuN (sgNeuN) (5′-GTTTGGGCTGCTGCTTCTCCG-3′) and for LacZ (sgLacZ) (5′-GTGCGAATACGCCCACGCGAT-3′) was previously described (Hana et al. co-submitted for publication). The sgRNA designs for mouse GFAP (sgGFAP), and mouse MOG (sgMOG) were designed in Benchling [26,27,28] based on specificity and efficiency scores. Seven GFAP and seven MOG sgRNA designs were screened in vitro with Cos1 and Neuro-2a cell lines for CRISPR efficiency (Supplementary Figs. 1, 2). The NeuN sgRNA, the most efficient GFAP sgRNA design #6 (5′-GAAGCCAGCATTGAGCGCCC-3′) and the most efficient MOG sgRNA design #4 (5′-GATGACAACTGGAGGAGAAGG-3′) were further used for AAV vector production. All sgRNAs contain a backbone structurally optimized for binding of Cas9 (5′-GTTTAAGAGCTATGCTGGAAACAGCATAGCAAGTTTAAATAAGGCTAGTCCGTTATCAACTTGAAAAAGTGGCACCGAGTCGGTGCTTTTTT-3′) [29].

GFAP and MOG overexpression vectors contain a CMV promoter that drives expression of mouse GFAP or mouse MOG fused with a Myc epitope tag. The Cas9 expression vector is a gift from Douglas Larigan (pVAX1-FLAG-NLS-SpCas9-NLS) which has a CMV promoter that drives expression of Cas9. Each AAV vector contains a pol III U6 promoter that drives expression of a sgRNA and a CBA promoter that drives expression of a green fluorescence protein (eGFP) fused with a nuclear localization signal (NLS). Single-stranded viral vectors were packaged into either AAV9, AAV-PHP.B, or AAV-PHP.eB at a titer of 5E13 vg/ml and were produced and purified (PackGene Biotech, Worcester, MA). Triple-plasmid transfection using polyethylenimine (PEI, Polyscience) was carried out to produce the recombinant AAV. The transfer plasmids AAV plasmid encoding the cargo described in the previous sgRNA design method section, pRep2CapX of AAV-X encoding Rep2 and CapX proteins plasmids, and pHelper were co-transfected into HEK293T cells. The cells were cultured in Dulbecco’s modified essential medium (DMEM; Invitrogen, USA) containing 10% fetal bovine serum (FBS) (Gibco, USA) and 1% penicillin–streptomycin antibiotics (Gibco, USA) at 37 °C. When the cells reached 80% confluence, they were transfected in 150 mm plates with 12 μg of pHelper plasmid, 10 μg of AAV pRep2CapX plasmids, and 6 μg of transfer AAV plasmids encoding the cargo for each plate. At 72 h post transfection, cells were harvested by 4000 × g centrifugation at 4 °C for 30 min. The pellet was collected and re-suspended in buffer containing 10 mM Tris-HCl, pH 8.0. The suspension was subjected to four freeze–thaw cycles by dry ice/ethanol and a 37 °C water bath. The cell debris was sonicated and then digested with DNase I (200 U in 1.5 ml) for 1 h at 37 °C. Following centrifugation at 10,000 × g for 10 min at 4 °C, the supernatant was collected as the AAV crude lysate. The crude lysate was diluted with 10 mM Tris-HCl pH 8.0 to a final volume of 10 ml and then bottom-loaded to a discontinuous gradient of 15, 25, 40, and 60% Iodixanol in a 39 ml ultracentrifuge tube (QuickSeal, 342414). After ultracentrifugation at 350,000 × g and 18 °C for 1 h, 3 ml fractions at lower position of 40% and 0.5 ml of 60% upper layer were collected. Ultracentrifugation was repeated at 350,000 × g and 18 °C for 1 h one more time and the fractions were desalted using a 100 kDa Cutoff Ultrafiltration tube (15 ml; Millipore, USA). The purified AAV were stored at −80 °C before usage. The viral titers were determined by SYBR Green qPCR.

The whole brains and spinal cords were removed from mice. Samples were fixed in 10% neutral buffer formalin, processed, and embedded into paraffin. Brains were transected sagittally and embedded in the midline down orientation, and spinal cords were transected and embedded in the transverse orientation. ISH staining was performed on a Leica Biosystems’ BOND RX Autostainer (Leica Biosystems) using RNAscope® 2.5 LSx Reagent Kit—RED (Advanced Cell Diagnostics) [31]. Staining was done according to the manufacturer’s instructions. Briefly, 5 µm thick sections were deparaffinized and rehydrated then subjected to target retrieval for 15 min at 95 °C using Leica Epitope Retrieval Buffer 2 (ER2) and protease treatment for 15 min at 40 °C, followed by specific probe-SpCas9 (ACDBio, 475788) hybridized to target RNA for the Cas9 homozygous and WT pups, and probe-eGFP (ACDBio, 400288) for the AAV-PHP.eB and mock transduced pups, respectively. The signal was amplified using a cascade of amplifier hybridizations to binding sites. Fast Red chromogenic detection was then performed. The background staining was assessed by negative control probe-dapB (ACDBio, 312038). Figures 1, 2 are from n = 3, biological replicates for Cas9 versus wild type and eGFP versus mock mice.

In vitro sgRNA screen in Cos1 cell line

The sgRNAs were compared for their efficiency in facilitating CRISPR-mediated disruption of the target gene expressed from a co-transfected plasmid in Cos1 cells (ATCC, Manassas, VA, CAT#CRL-1650). Cos1 cells were maintained in DMEM supplemented with 10% heat-inactivated FBS, 1% penicillin–streptomycin (Gibco, 15070-063), and 2 mM L-glutamine. FuGENE HD (Promega, San Luis Obispo, CA, E2311) was used for transfection according to the manufacturer’s instructions. Briefly, the GFAP or MOG overexpression plasmid, Cas9 expression plasmid, and sgRNA plasmid were mixed in a 1:4:5 ratio to a total of 0.5 µg, and incubated with 1.5 µL of FuGENE HD in 25 µL Opti-MEM (Thermofisher, 31985962) prior to adding to the cultured cells. Twenty-four hours after transfection, cell lysates were harvested in 200 µL Novex Tris-Glycine SDS Sample Buffer (1.6×, Thermofisher, LC2676) with NuPage Sample Reducing Agent (Thermofisher, NP0009) and heated at 70 °C for 5 min (ThermoMixer C, Eppendorf). Lysates were sonicated at a force of 4 for 20 strokes (60 Sonic Dismembrator, Fisher Scientific). The lysates were subjected to western blotting analysis.

Neuro-2a cell line with tetracycline-inducible Cas9 expression, (SL508, GeneCopoeia, Rockville, MD), was also used to examine sgRNAs for their efficiency in facilitating CRISPR-mediated disruption of the target gene expressed from a co-transfected plasmid. Neuro-2a cells were maintained in DMEM supplemented with 10% heat-inactivated FBS, 1% penicillin–streptomycin (Gibco, 15070-063), and 2 mM L-glutamine. Cells were treated with 0.01, 0.1, or 1 µg/ml of doxycycline to induce expression of Cas9. After 24 h, cells were co-transfected with the GFAP or MOG overexpression plasmid and sgRNA plasmid in a 1:9 ratio by FuGENE (Promega, San Luis Obispo, CA, E2311) according to the manufacturer’s instructions. 24 h after transfection, cell lysates were harvested in 200 µL Novex Tris-Glycine SDS Sample Buffer (1.6×, Thermofisher, LC2676) with NuPage Sample Reducing Agent (Thermofisher, NP0009) and heated at 70 °C for 5 min (ThermoMixer C, Eppendorf). Lysates were sonicated at a force of 4 for 20 strokes (60 Sonic Dismembrator, Fisher Scientific). The lysates were subjected to Western blotting analysis.

In Figs. 3–5, quantification was performed for each AAV variant within each CNS region. The averages of the protein signals from AAV-CRISPR/sgLacZ (not shown) were normalized to 100% as baseline (dotted line). Remaining protein levels after CRISPR-mediated protein disruption are presented as means ± standard error of the mean (s.e.m.). Statistical analyses (a two-way ANOVA followed by a Tukey’s test) were performed using GraphPad Prism 7 software. Experimental groups were considered to be significant for p values < 0.05 and <0.01 for all experiments. The p value was only corrected within each CNS region. Protein levels significantly different between AAV variants are denoted with a “*” sign. Within each AAV variant, protein levels significantly different from the corresponding baseline (sgLacZ) are denoted with a “#” sign.