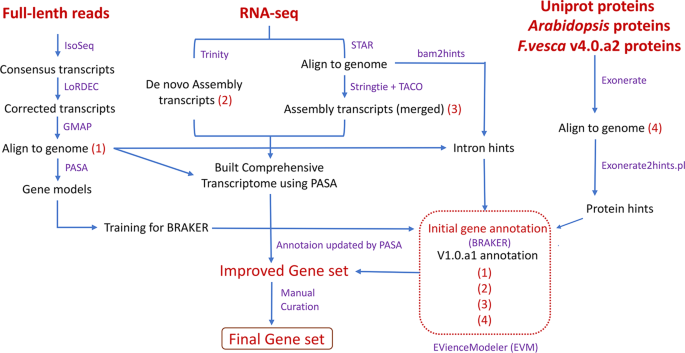 Reannotation of the F. ananassa genome via our prior pipeline

Evaluation of the v1.0.a2 annotation

MAKER223 was used to measure the consistency of gene loci with the available protein and nucleotide sequence alignments, the process of which was based on the mRNA quality index (QI) and annotation edit distance (AED). Each gene was assigned a QI score between 0 and 1, and a higher QI score suggests a higher proportion of exons that match the transcript alignment. The AED score is also between 0 and 1, where 0 indicates complete consistency with the evidence and where 1 means complete inconsistency with the evidence. The AED distribution is shifted toward lower (better) scores in v1.0.a2 compared with v1.0.a1 (Fig. 2b). In contrast, the cumulative QI distribution shows that the QI is shifted toward higher (better) scores in v1.0.a2 compared with v1.0.a1 (Fig. 2c). Therefore, v1.0.a2 has a higher proportion of gene models supported by the transcript evidence.

We used BUSCO v3.0.224 (embryophyta_odb9 database) to assess the completeness of the v1.0.a1 and v1.0.a2 annotations. BUSCO measures genome assembly and annotation completeness based on a curated set of Plantae lineage-specific single-copy orthologs. With respect to the 1440 conserved genes, v1.0.a2 harbors 97.85% complete BUSCOs, compared to 96.88% harbored by v1.0.a1 (Table 1).

Several RNA-seq analyses of F. ananassa fruit development have been reported over the past several years16,17; these analyses have used the F. vesca genome as a reference genome due to the absence of a high-quality F. ananassa genome. In this study, we reanalyzed the transcriptome of the four stages of achenes and receptacles, the green (G), white (W), turning (T), and red (R) stages, with three biological replicates each16. Accurate gene expression profiling based on the new genome assembly and annotation should be helpful for genetic and functional research of strawberry fruit development and serves as a valuable resource. The gene read counts and expression profiles (transcripts per million (TPM)) of all the annotated genes in the achene and receptacle tissues across the four stages are presented in Table S6. A total of 42,624 genes (39.3% out of the 108,447 genes) were expressed at a level higher than 2 TPM in at least one of these tissues. The table also indicates their homologous genes in Arabidopsis and the corresponding gene annotation if available. In addition, we analyzed the global gene expression changes in the achenes and receptacles among the different stages, with the expression of more genes being downregulated than upregulated as ripening progressed (Fig. 4a, Tables S7, S8). In both the achenes and receptacles, the greatest number of DEGs between two consecutive stages was found between the green and white stages, which is consistent with the results of previous studies16. For receptacles, the top three enriched GO terms were alpha-amino acid catabolic process, cellular amino acid catabolic process, and carboxylic acid metabolic process, which are related to active metabolic processes occurring during fruit development.

To identify the transcriptional dynamics associated with fruit ripening, the DEGs with different expression profiles were assigned to different gene clusters using the K-means clustering approach. For the receptacle, a total of 6435 genes were found to be differentially expressed (padj < 0.01, fold change >2). All the DEGs were assigned to 12 coexpression clusters (Fig. 4b, Table S9). The expression pattern of cluster 10 exhibited a gradual decrease during receptacle development; this cluster was overrepresented with genes with GO terms associated with photosynthesis, generation of precursor metabolites, and energy-producing molecules (Table S10). Cluster 6, which consists of genes abundantly expressed in the red stage receptacle, was characterized by an abundance of genes associated with GO terms associated with catalytic activity. Many fruit ripening-related genes were in cluster 6. For example, FaMYB10 (FxaC_2g30690), predominantly expressed in the red receptacle (RR), is a master transcriptional regulator of genes acting in the flavonoid/phenylpropanoid pathway during fruit ripening32,33. Finally, we clustered the genes differentially expressed during achene development (Fig. S1, Tables S11, S12). From green achenes (GAs) to white achenes (WAs), the expression levels of 4480 genes were significantly upregulated in WAs. Among these DEGs are 23 CRU1 genes, homologs of AtCRU1 (AT5G44120), which code for a 12S seed storage protein whose phosphorylation state is modulated in response to ABA in Arabidopsis thaliana seeds34,35. However, only 25 CRU1 genes exist in F. ananassa, indicating that most CRU1 genes are highly expressed in achenes after the white stage (Fig. 4c). This indicates that achenes, which contain seeds, accumulate storage proteins after the white stage.

Strawberry genome database (SGD) based on the ViroBLAST webserver

We constructed a SGD website for our new annotations (both F. ananassa (v1.0.a2) and F. vesca (v4.0.a2)), providing easy access to the F. ananassa and F. vesca genomes through downloading and homolog searching (http://www.strawberryblast.ml:8080/strawberry/viroblast.php) (Fig. 5). The SGD website, which is based on the ViroBLAST webserver36, allows users to search (via BLAST) the cDNA and protein sequences of both the F. vesca and F. ananassa genomes. Users can upload sequences as FASTA files or paste them into the query box directly. Additionally, the website provides more BLAST options for advanced users to obtain more specific information.