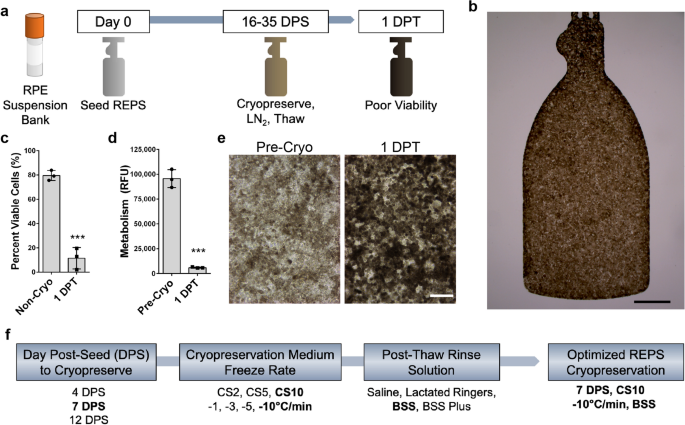 Optimization of cryopreservation parameters for REPS

REPS are produced by seeding a suspension of RPE cells onto a vitronectin-coated parylene scaffold followed by in vitro culture until the time of cryopreservation (Fig. 1a). Like other melanized cell types, RPE cells develop melanosome organelles, which are the intracellular sites of melanin biosynthesis. After approximately two weeks of culture, REPS exhibit cellular pigmentation, and cells gradually appear darker by visual inspection with additional time in culture. We initially generated and attempted to cryopreserve REPS that were similar to the mature, non-cryopreserved RPE implant employed in a Phase I/IIa clinical trial10 (Fig. 1a,b). However, attempts to cryopreserve pigmented REPS were unsuccessful (Fig. 1c–e). By one day post-thaw (DPT) less than 10% of the RPE cells were viable as determined by propidium iodide exclusion and exhibited significantly lower metabolic rates compared to pre-freeze levels as assessed by AlamarBlue reduction (P < 0.001) (Fig. 1c,d,). Notably, low post-thaw viability was associated with rapid hyperpigmentation that manifested within the first 24 hours post-thaw (Fig. 1e). Due to the poor post-thaw phenotype of pigmented RPE cells, we developed a process to cryopreserve REPS by (i) identifying a time point to freeze REPS prior to the onset of RPE cell pigmentation, (ii) determining an optimal cryopreservation medium and freeze rate, and (iii) selecting a compatible post-thaw rinse solution (Fig. 1f).

Appropriate freezing parameters depend on available cell surface area, rate of fluid transport across the plasma membrane, and the permeability of the scaffold18,24. These properties, combined with the cooling rate and the concentration of cryoprotective agents such as dimethyl sulfoxide (DMSO), affect intracellular ice formation, osmotic potential, and cell survival post-thaw24. REPS were cryopreserved using CryoStor, a fully defined, xeno-free cryopreservation medium. Formulations of CryoStor containing 2%, 5%, and 10% DMSO (CS2, CS5, and CS10, respectively) were tested using freeze rates of − 1 °C/min, − 3 °C/min, − 5 °C/min, and − 10 °C/min. Since the cumulative effects of necrotic and apoptotic pathways in response to freeze/thaw manifest within the first 24 hours after thaw25, cell viability was assessed 1 DPT in all cases. Although no significant differences in post-thaw viability were detected among the conditions (P = 0.078), qualitative differences in RPE cell morphology were observed by visual inspection (Supplementary Fig. S1c,d). REPS frozen in CryoStor formulations that contained higher concentrations of DMSO (CS5 and CS10) exhibited more consistent cuboidal RPE cell morphology 1 DPT compared to REPS frozen in CS2 (Supplementary Fig. S1c). Cooling rates ranging from − 3 to − 10 °C/min employed with either CS5 or CS10 yielded similar morphology and viability results (Supplementary Fig. S1c,d). Since a faster cooling rate may be more favorable for industrial production logistics, − 10 °C/min and CS10 were selected as the cryopreservation parameters for subsequent process optimization.

Cryopreserved cells are hypertonic relative to the aqueous rinse solutions that are typically employed to remove cryoprotectants post-thaw, which can lead to osmotic stress and cell-swelling, the primary causes of cell death during the thawing process24. To investigate a suitable rinse medium, four solutions approved for clinical use were examined: Normal Saline, Lactated Ringers, Balanced Salt Solution (BSS), and BSS PLUS. Normal Saline and Lactated Ringers are isotonic solutions typically used for intravenous administration, whereas BSS and BSS PLUS are irrigation solutions designed for ocular applications. REPS rinsed with BSS or BSS PLUS maintained characteristic RPE cuboidal morphology with high viability (95%) 1 DPT, while REPS rinsed in Normal Saline or Lactated Ringers had significantly reduced viability (P < 0.05) or poor morphology 1 DPT, respectively (Supplementary Fig. S2a,b). Healthy RPE cells secrete the neurotrophic factor pigment epithelium-derived factor (PEDF) in vivo, and PEDF secretion increases in vitro as RPE cultures polarize and mature11,26,27. No significant differences were detected among the rinse conditions for levels of secreted PEDF by 7 DPT (P = 0.41), and REPS from all conditions developed pigmented, polygonal morphology by 21 DPT (Supplementary Fig. S2a,c).

In order to remove residual DMSO from cryopreserved REPS, a two-step rinse procedure was developed. Immediately upon thaw, REPS were sequentially submerged into two fresh volumes of BSS. Analysis of the two rinse volumes after incubation with thawed REPS indicated a residual DMSO concentration of 0.014% (1.85 mM) in the first rinse solution, and < 20 µM DMSO (below the assay’s limit of detection) in the second rinse solution (Supplementary Fig. S2d). These results demonstrate significant removal of residual DMSO by the two-step rinse procedure.

In summary, REPS exhibit optimal post-thaw cell survival and expression of the RPE cell phenotype when cryopreserved at 7 DPS using a freezing rate of − 10 °C/min and a commercially available, xeno-free cryoprotectant (CS10) in conjunction with post-thaw rinsing in an irrigating solution approved for clinical use (BSS) (Fig. 1f).

Cryopreservation and thaw of clinical-grade REPS using the optimized protocol

We next sought to determine whether clinical-grade cells could be similarly cryopreserved using the optimized parameters. Accordingly, REPS were seeded using a bank of RPE cells that was produced using current good manufacturing practices (cGMP) and released for clinical application. Characterization was performed prior to cryopreservation at 7 DPS and at three time points post-thaw to monitor recovery and maturation as evidenced by viability, gene expression, cuboidal RPE cell morphology, and secretory function (Fig. 2a). Non-cryopreserved REPS were maintained in uninterrupted in vitro culture to provide age-matched controls for each sampling time point (Fig. 2a).

To monitor the secretory function of cryopreserved clinical-grade REPS, the concentration of the neurotrophic factor PEDF in REPS-conditioned medium was quantified by ELISA prior to cryopreservation at 7 DPS (n = 93) and at two time points post-thaw: 7 DPT and 21 DPT (n = 33). The amount of PEDF secreted by REPS significantly increased (P < 0.001) from pre-cryopreservation levels (5.5 ± 0.53 ng/mm2/24 h, mean ± SD) within the first week post-thaw, as measured at 7 DPT (8.7 ± 1.7 ng/mm2/24 h) (Fig. 2d). By 21 DPT, cryopreserved/thawed REPS also demonstrated a significant increase (P < 0.001) in the amount of secreted PEDF (14 ± 1.6 ng/mm2/24 h) when compared to 7 DPT (Fig. 2d). Age-matched non-cryopreserved control REPS were assessed at 15 DPS and 28 DPS (n = 10) and secreted comparatively higher levels of PEDF (12 ± 0.82 and 16 ± 1.3 ng/mm2/24 h, respectively) compared to the thawed REPS (Fig. 2d). Thawed REPS secreted significantly less PEDF at 7 DPT (P < 0.01) and 21 DPT (P < 0.05) when compared to the age-matched non-cryopreserved control, but a trend of increasing PEDF secretion over time by thawed REPS was observed (72.5% and 87.5% of controls, respectively). Furthermore, by visual inspection the cryopreserved/thawed REPS acquired pigmentation similar to that of control REPS over the course of the analysis (Fig. 2e). These data suggest that cryopreserved REPS retain secretory function and mature post-thaw despite the cryogenic disruption of culture.

Further evidence of the capacity of REPS to mature post-thaw was demonstrated by a significant increase (P < 0.01) in the expression of the mature RPE marker gene RPE65 by 21 DPT compared to the expression level prior to cryopreservation and immediately post-thaw (Fig. 2f). There were no significant differences between thawed REPS and the age-matched non-cryopreserved control for the expression of genes abundant in early (TYRP1) and mature (RPE65) RPE cells for any of the time points tested (Fig. 2f). Thawed REPS also expressed similarly low levels of the EMT marker S100A4 at all sampling time points (Fig. 2f).

Stability of cryopreserved REPS throughout 1 year of storage in LN2

One of the fundamental advantages of a cryopreserved product is an extended shelf life. Therefore, the stability of cryopreserved REPS maintained in long-term LN2 storage was assessed for periods of 1 week, 6 months, and 1 year (n = 3 per time point). There were no significant differences observed among the storage periods for post-thaw viability, morphology, and gene expression. REPS retained > 92% viability 1 DPT and exhibited similar morphology compared to non-cryopreserved control REPS (Supplementary Fig. S5a,c). By 21 DPT REPS from each of the LN2-storage periods acquired characteristic cellular pigmentation and were comparable to non-cryopreserved control REPS for the expression of RPE marker genes (TYRP1, RPE65) as well as low expression of the EMT marker S100A4 (Supplementary Fig. S5b,d). To further characterize the RPE phenotype of REPS cryopreserved for 15 months, in vitro phagocytosis assays were conducted at 7 DPT and 28 DPT using FITC-labeled bovine photoreceptor outer segments (FITC-POS). After incubation of 7 DPT REPS with FITC-POS, internalized FITC-POS were readily apparent in orthogonal projections of the REPS monolayer (Fig. 3a). Furthermore, the number of FITC-POS present was significantly reduced by co-incubation with a function blocking antibody against ɑvβ5-integrin (P < 0.001), which is an integrin receptor required for efficient phagocytosis of POS by RPE cells (Fig. 3b)32,33,34. Similar results were observed for REPS cultured for 28 DPT prior to the phagocytosis assay (Fig. 3c,d). Together these data provide proof-of-concept for the stability of REPS stored in LN2 through one year as demonstrated by high viability and retention of characteristic RPE phenotype and function post-thaw.

The ability to immediately administer cryopreserved REPS upon thaw would obviate the need for extended periods of culture post-thaw and would enable on-demand shipping to clinical sites. To demonstrate RPE cell survival, maturation, and function in vivo, cryopreserved REPS were thawed and immediately implanted into the subretinal space of the immunodeficient RCS/nude rat model of retinal degeneration35. The length and width of the parylene scaffold were reduced to accommodate the size of the rat subretinal space while the thickness and permeability of the scaffold remained unchanged17. The miniaturized rat REPS (rREPS) (Fig. 4a) were cryopreserved at 7 DPS using CS10 at − 10 °C/min, thawed, rinsed, and immediately implanted into the subretinal space (Fig. 4b). Implanted eyes were isolated at 30, 60, and 90 days post-implantation (DPI), and histological sections were analyzed for the expression of human and mature RPE markers by immunohistochemistry. Non-cryopreserved rREPS were examined at 150 DPI as a control. Cryopreserved/thawed RPE cells were observed as an intact monolayer supported by the parylene scaffold at each time point post-implantation (Fig. 4c). The human origin of the RPE cells was confirmed by TRA-1-85 immunolabelling of the pigmented monolayer associated with the scaffold (Fig. 4d)36. The percentage of rats exhibiting TRA-1-85-immunopositive rREPS was similar for each of the sampling time points of the cryopreserved/thawed condition as well as the non-cryopreserved control (Fig. 4e). The presence of a pigmented monolayer of human origin over the course of the analysis suggests that cryopreservation does not adversely affect the ability of RPE cells to remain adhered to the scaffold during surgery and implantation.

RPE65 is a critical enzyme that is necessary for the regeneration of the chromophore of the visual cycle, and RPE65 expression by RPE cells becomes more abundant during maturation and development28,37. The percentage of rats exhibiting RPE65-immunolabelled rREPS substantially increased over the post-implantation period (Fig. 4f,g). As observed 30 DPI, significantly fewer rats (P < 0.01) exhibited RPE65-immunopositive rREPS (19%). By 60 DPI and 90 DPI however, 58% and 67% of the implanted animals, respectively, demonstrated RPE65 immunoreactivity by the cryopreserved/thawed RPE cells associated with the parylene scaffold, which was comparable to the percentage of control animals (75%) assessed at 150 DPI that received non-cryopreserved rREPS (Fig. 4f,g). The substantial increase of animals that exhibited RPE65 immunolabelling over the course of the analysis suggests that RPE cells continue to mature in vivo after the cryopreserved rREPS are delivered into the subretinal space immediately post-thaw.

A primary function of mature RPE cells is the daily phagocytosis of shed photoreceptor outer segments (POS)28. Phagocytic function may be demonstrated in vivo by the presence of the photopigment rhodopsin within RPE cells as visualized by immunohistochemistry38. Phagocytosis by rREPS was determined by anti-rhodopsin immunolabelling of intracellular inclusions within RPE cells immunolabelled for either TRA-1-85 or RPE65 that were associated with the parylene scaffold (Fig. 4f, Supplementary Fig. S6). A comparable percentage of animals demonstrating phagocytic activity by rREPS was observed among each of the cryopreserved sampling time points and the non-cryopreserved control condition (Fig. 4h). Collectively, these data demonstrate that cryopreserved rREPS may be delivered immediately post-thaw into the subretinal space and that the RPE cells are able to survive as a monolayer, mature, and retain phagocytic function in vivo.