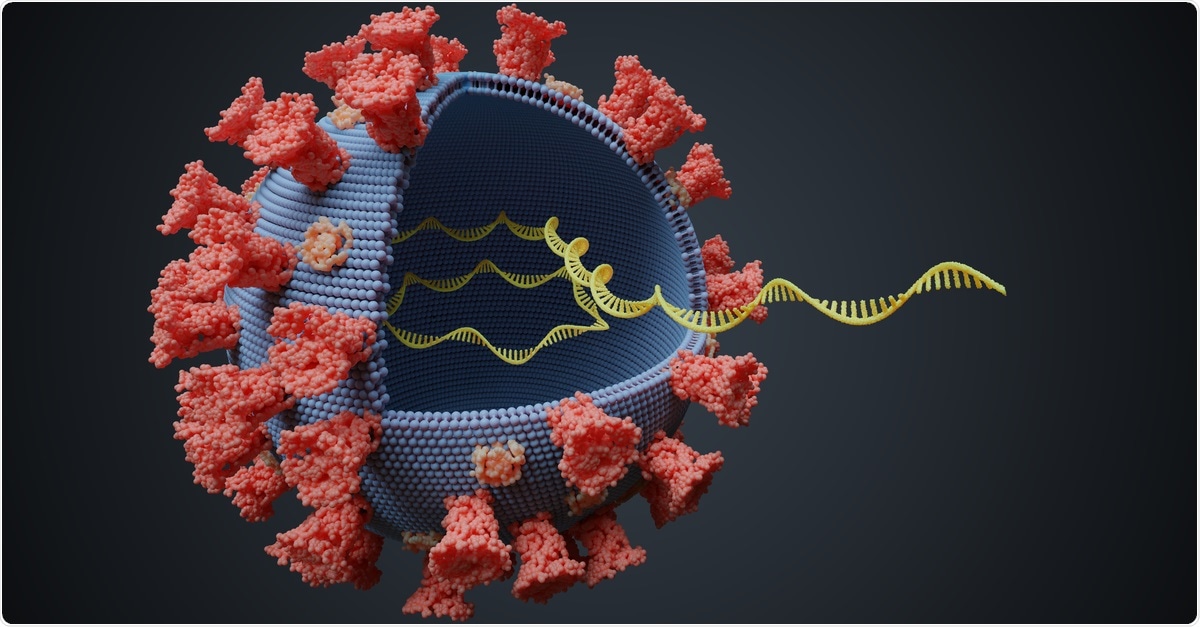 The initiation of viral RNA synthesis has evolved to take place by a wide variety of mechanisms, broadly categorized between primer-independent or primer-dependent. Considerable variation is observed within these categories, however, and the specific mechanisms directing the replication and transcription of viral RNA in coronaviruses have yet to be entirely elucidated.

In a paper recently uploaded to the bioRxiv* preprint server, the role of a coronavirus-specific protein domain in SARS-CoV-2 viral synthesis initiation is investigated, and potential therapeutic solutions have been explored.

The coronavirus genome is comparatively enormous, being around three times larger than most other significant ssRNA viruses such as zika or poliovirus, and has therefore evolved a number of novel domains that remain poorly characterized. The viral genome translates 16 non-structural proteins involved in replication and genome maintenance, three of which (nsp12, nsp7, and two nsp8) associate to form the replication-transcription complex (RTC).

Following entry into the host cell, it is the RTC that initiates viral synthesis. In coronaviruses, nsp12 seems structurally similar to other “small thumb” RNA polymerases, termed for the conformational adjacency of subdomains in the protein that resemble a hand. The coronavirus nsp12 N-terminus contains a nidovirus (the order to which coronaviruses belong) specific domain known as NiRAN, which appears to assist in multiple RNA synthesis operations, including the transfer of single nucleotide bases to the RTC.

The group incubated the constituents of the SARS-CoV-2 RTC, nsp12, nsp7, and nsp8, with UTP, and found that in order to prime for RNA synthesis, the NiRAN domain of nsp12 is firstly labeled with a uridine monophosphate (UMPylation), which is then specifically and efficiently transferred to nsp8. This strategy of virus replication initiation was shown to be present for negative-strand synthesis, where the genome acts as a complementary strand from which mRNA is synthesized by the RTC.

However, NiRAN mutants without the ability to undergo nsp8 UMPylation are still able to synthesize RNA, suggesting that alternative mechanisms exist in coronaviruses. A less active NiRAN independent route was uncovered, where the required peptide primer sequence is constructed outside of the RTC complex and then migrates into it for further transcription.

However, coronaviruses possess novel cellular machinery that allows them to repair mismatched base pairs with surprising efficiency, massively compromising the efficacy of these drugs. As the NiRAN domain also utilizes nucleotide bases within its regular function, it could make a useful alternate target for nucleotide analog therapies.

Two nucleotide analog drugs were tested against SARS-CoV-2, the uracil analog Sofosbuvir and its guanosine equivalent AT-511. The former is clinically approved for use against hepatitis C, though has shown poor efficacy against SARS-CoV-2, while similar analogs to the latter have been implicated as broad-spectrum anticoronavirals.

Both drugs were shown to be excised by SARS-CoV-2 RNA-repair 3′-to-5′ exonucleases, reducing their potency. However, when bound to the NiRAN active site, AT-511 inhibits nsp8 UMPylation, the primary RNA synthesis initiation mechanism in SARS-CoV-2. Cryo-electron microscopy studies revealed the way in which AT-511 binds with the RTC, finding that the nucleotide analog is simultaneously bound to the NiRAN domain of nsp8 and the nucleotide active site of nsp12.

The group suggests that the hydrophobic tail of AT-511 creates hindrance, preventing incoming nucleotide bases from being correctly positioned and thereby terminating the nucleotide chain. The potency observed is explained by the dual-targeting nature of the analog, blocking both the NiRAN and the RTC binding pockets directly, which are additionally unlikely to develop resistances by mutation in future due to the vital and conserved role of these proteins across coronaviruses.