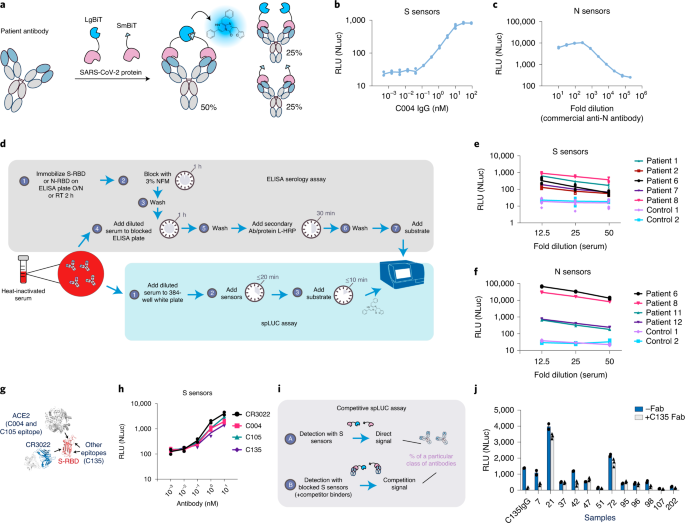 Plasmids were constructed by standard molecular biology methods. The DNA fragments of Spike-RBD, N protein, ACE2 and LgBiT were synthesized by IDT Technologies. The SmBiT tag was generated by overlap extension PCR. The Spike-RBD-5/15/25aa-LgBiT-12xHisTag, Spike-RBD-15/25aa-SmBiT-12xHisTag, N protein(44–180)-10aa-LgBiT-12xHisTag, N protein(44–180)-10aa-SmBiT-12xHisTag, LgBiT-10aa-N protein(44–257)-12xHisTag and SmBiT-10aa-N protein(44–257)-12xHisTag were generated by subcloning into a pFUSE-12xHisTag vector (adapted from the pFUSE-hIgG1-Fc vector from InvivoGen). The ACE2-Fc fusion plasmids were generated by subcloning the gene fragments of ACE2 and mutant into the pFUSE-hIgG1-Fc vector. The C004, C105 and C135 IgG LC and HC plasmids were a generous gift from the Nussenzweig lab (Rockefeller University). The CR3022 IgG plasmids were a generous gift from the Kim lab (Stanford University) and the Wilson lab (Scripps Research Institute). The C135 Fab was cloned by removing the Fc domain from the HC plasmid. SnapGene and ApE were used for cloning design and sequence verification.

All proteins were expressed and purified from Expi293 BirA cells according to established protocols from the manufacturer (Thermo Fisher Scientific). Briefly, 30 μg of pFUSE (InvivoGen) vector encoding the protein of interest was transiently transfected into 75 million Expi293 BirA cells using the ExpiFectamine kit (Thermo Fisher Scientific). For the IgG and Fab proteins, 15 μg of each chain was transfected. Enhancer was added 20 h after transfection. Cells were incubated for a total of 3 d at 37 °C in an 8% CO2 environment before the supernatants were harvested by centrifugation. Fc-fusion proteins were purified by protein A affinity chromatography, and His-tagged proteins were purified by Ni-NTA affinity chromatography. Purity and integrity were assessed by SDS/PAGE. Purified protein was buffer exchanged into PBS and stored at −80 °C in aliquots. Concentration was verified by absorbance on a NanoDrop with NanoDrop 2000c software.

LgBiT and SmBiT sensors for either the Spike or N protein were prepared at a final concentration of each sensor at 2 nM in PBS + 0.05% Tween-20 + 0.2% BSA (PBSTB). For in vitro IgGs or ACE2-Fc, the samples were prepared at 1:10 dilutions in PBSTB unless otherwise specified. Serum and blood samples were diluted to 1:12.5 for both the S and N sensor samples in PBSTB unless otherwise specified. Healthy individual saliva was spiked in with CR3022 and used undiluted or diluted 1:2 in PBSTB. Then, 10 μl of the 2 nM sensor mix and 10 μl of the sample were combined in a 384 Lumitrac white plate (Greiner), skipping every other well and row to avoid potential bleedover in signal. The plate was mixed on a plate shaker for 20 min. NanoLuc substrate was diluted according to protocol 1:50 in NanoLuc dilution buffer (Promega), and 15 μl was added to each well, followed by a 10-min incubation period for the signal to stabilize. Luminescence was measured on a Tecan M200 infinite plate reader with an integration time of 1,000 ms. Tecan i-control plate reader software was used for data acquisition.

Competition serology protocol for in vitro and serum samples

Biolayer interferometry data were measured using an Octet RED384 (ForteBio). Biotinylated Spike RBD protein was immobilized on the streptavidin biosensor (ForteBio). After blocking with biotin, the sensor was loaded with one IgG followed by another IgG or ACE2-Fc to determine epitope binning. PBS with 0.05% Tween-20 and 0.2% BSA was used for all diluents and buffers. ForteBio Octet Data Acquisition software was used for acquiring data, and ForteBio Octet Data Analysis software was used for analyzing data.

Plasma was diluted 12.5-fold into a 96-well plate, and, subsequently, 10 µl was dispensed into an individual flat-bottom white plate (Greiner Lumitrac 200, 384-well plates) using a Biomek FXP Automated Workstation (Beckmann Coulter). Next, 10 µl of 1 nM biosensors was dispensed using Thermo Multidrop Combi Reagent Dispenser (Thermo Fisher Scientific) to assay plates and incubated at room temperature for 20 min. Then, 15 µl of substrate was added using the same reagent dispenser and incubated at room temperature for 10 min. Luminescence was read on a Tecan M200 infinite plate reader with an integration time of 1,000 ms.

Simulated automation of the spLUC assay on a robotic platform

To facilitate high-throughput screening of serum, a semi-automated approach was developed and simulated using the UCSF Antibiome Center robotics platform40. Serum in 96-well plates is first diluted 12.5-fold, and 10 µl is dispensed into four individual flat-bottom white plates (Greiner Lumitrac 200, 384-well plates) using a Biomek FXP Automated Workstation (Beckmann Coulter). Serum-containing assay plates are then transferred to a robotics protocol with dispensing of biosensor and substrate followed by luminescence reading. Although one iteration of 96 samples takes 40 min, each additional iteration takes an additional 3.5 min, limited by luminescence reading (1 s per well plus plate transfer). As such, it is estimated that 40 plates (3,840 assays) could be run in 3 h. The robotics run was developed and simulated using Thermo Momentum software (v5.0.6).

Lyophilization of sensors and dilution buffer

The S and N protein sensors were flash frozen in liquid nitrogen at concentrations between 10 μM and 60 μM in 10 μl. The dilution buffer was frozen in liquid nitrogen in 5-ml aliquots. A small hole was poked into the caps of the samples and left on a BenchTop K (VirTis) lyophilizer overnight. The next day, the sensors were reconstituted in 10 μl of double-distilled water (ddH2O), and concentration was verified by NanoDrop. The dilution buffer was similarly reconstituted in 5 ml of ddH2O.

Next, 20 μl of substrate was aliquoted in a dark Eppendorf tube and subjected to vacuum centrifugation overnight on a Genevac instrument. The substrate was stored in the dark for 2 d at room temperature before reconstitution in 20 μl of 100% methanol. The substrate was diluted 1:50 as normal in dilution buffer for the assay.

All graphing and statistical analysis were performed in GraphPad Prism or Microsoft Excel. The unpaired multiple t-test was performed in Prism to compare conditions in each patient for the competition spLUC assay. The non-parametric Spearman correlation analysis was used in Prism to determine the correlation R value between datasets. When two groups were compared, an unpaired Mann–Whitney test was performed to determine the difference between datasets. For comparison of three or more groups, a Kruskal–Wallis test with Dunn’s multiple comparison post hoc testing was used. A two-tailed P value was used to determine statistical significance for all analysis. P < 0.05 was considered statistically significant.