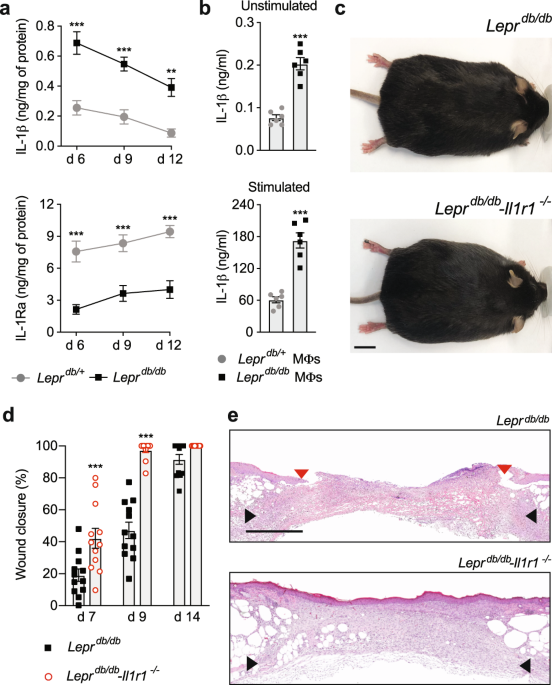 Wild-type C57BL/6 mice were obtained from the Monash Animal Research Platform. BKS.Cg-Dock7m +/+ Leprdb/J (Leprdb/db) mice were obtained from the Jackson Laboratory. Because Leprdb/db mice are sterile, Leprdb/+ mice were crossed to Il1r1−/− mice21 to obtain fertile Leprdb/+–Il1r1−/+ mice. Then, Leprdb/+–Il1r1−/+ were crossed together to obtain Leprdb/db–Il1r1−/− mice. Animals were kept under specific pathogen-free conditions. All animal experiments were conducted in accordance with Monash University guidelines and approved by the Monash Animal Research Platform ethics committee (#13395 approved 18/08/2017, #17075 approved 28/05/2019).

Bone marrow from femora and tibiae of C57BL/6 mice (8-week old) was flushed out with Dulbecco’s Modified Eagle Medium/Nutrient Mixture (DMEM/F12 medium, Gibco) using a 27-gauge needle and a syringe. Cells were filtered through a 70 μm nylon strainer, centrifuged at 500 g for 10 min at 4 °C and resuspended in DMEM/F12 medium containing 10% heat-inactivated FBS, 100 mg/ml penicillin/streptomycin and 20 ng/ml murine M-CSF (R&D Systems). Cells were plated in 150 mm diameter Petri dishes at a density of 5 × 107 and cultured for 7 days at 37 °C and 5% CO2. Medium was replaced every 3 days. After 7 days, macrophages were detached using TrypLE (Gibco) containing 3 mM EDTA and seeded in 12-well plates at a density of 2 × 105 cells per well in DMEM/F12 with 10% heat-inactivated FBS and 100 mg/ml penicillin/streptomycin. For measurement of secreted IL-1β, macrophages were unstimulated or stimulated with 100 ng/ml LPS (InvivoGen) for 3 h followed by 5 mM ATP (InvivoGen) for 21 h. The concentration of IL-1 released in the media was measure by ELISA (IL-1 DuoSet ELISA kit, R&D Systems). For macrophage stimulation with IL-1β, cells were co-stimulated with IL-1β (1 ng/ml) and IL-1Ra variants at increasing concentrations (0 to 1 μg/ml of IL-1Ra or equimolar concentration of IL-1Ra/PlGF123–141). After 24 h, the concentration of IL-6 released in the media was measured by ELISA (IL-6 DuoSet ELISA kit, R&D Systems).

The backs of male mice (12–14-week old) were shaved and two to four full-thickness punch-biopsy wounds (5 mm in diameter) were created as described previously20. The wounds were treated topically with 10 μl saline (PBS) or protein solution in PBS (0.5 μg IL-1Ra, 0.61 μg IL-1Ra/PlGF123–141, 0.5 μg PDGF-BB, 0.65 μg PDGF-BB/PlGF123–141). The wounds were covered with a non-adhering dressing (Adaptic, Johnson & Johnson) and adhesive film dressing (Hydrofilm, Hartmann). For wild-type mice, the backs of 10–12-week-old male mice (C57BL/6) were shaved and two 5 mm diameter full-thickness biopsy punches were created on the upper middle of the back. The wounds were then splinted with 6 mm nylon rings (Zenith, ITW Proline) and the rings were covered with small adhesive circular bandages (Elastoplast, Beiersdorf). The rings were then further covered with one layer of adhesive surgical tape (Blenderm, 3 M) going around the mouse. The following day, wounds were treated topically with 10 μl saline (PBS) or IL-1Ra/PlGF123–141 (0.61 μg in PBS). Bandages were removed and re-applied every other day. At specific time points post wounding, animals were humanely euthanised via CO2 inhalation and the wounds were harvested for biochemical or histological analysis.

Wounds were harvested with an 8 mm tissue biopsy punch and fixed in 10% neutral buffered formalin for 24 h at room temperature. The samples were trimmed until the edge of the wound, embedded in paraffin and serially sectioned into 4 μm slides until the centre of the wound was passed. The extent of re-epithelialization was measured by histomorphometric analysis. Slides were stained with hematoxylin and eosin and wound centres were determined by measuring the distance between the panniculus carnosus muscle gap using Aperio ImageScope Viewer (Germany). The extent of wound closure is calculated as the ratio between the epidermis closure over the length of the panniculus carnosus gap.

Biochemical analysis of the wounds

PlGF fragment sequences were cloned into the expression vector pGEX6P-1 (GE Healthcare). A histidine tag (6x histidine) was added at the C terminus of fragments. The fragments were expressed in E. coli BL21 (DE3). Bacteria were cultured overnight in 10 ml lysogeny broth (LB) medium with 100 μg/ml of ampicillin overnight. Then the culture was diluted 1:100 in 250 ml of LB medium with 100 μg/ml of ampicillin and cultured at 37 °C for 3 h. Protein production was induced with 1 mM of isopropyl β-D-1-thiogalactopyranoside (IPTG) overnight at 25 °C. Then, the culture was centrifuged at 4000 g for 10 min. The pellets were resuspended in cold PBS with one tablet of protease inhibitor cocktail (Roche), 50 mg of lysozyme (Roche). The solution was sonicated for 20 s with maximum amplitude for 3–4 cycles. Benzonase (500 U, Millipore), 1 mM MgCl2 and 1% Triton X-100 were added and the solution was incubated on a rotor for 30 min at 4 °C. Lysate was centrifuged at 12,000 g for 10 min and the supernatant filtered through a 0.22 μm filter. Proteins were first purified using a GSTrap HP 5 ml and secondly with a HisTrap HP 5 ml (GE Healthcare) affinity columns. Chaperone proteins were removed by using an ATP buffer (50 mM Tris-HCl, 150 mM NaCl, 10 mM MgSO4, 2 mM ATP, pH 7.4). A Triton X-114 buffer (PBS with 0.1% Triton X-114) was used to remove lipopolysaccharides. The final protein solution was dialysed against PBS and filtered through a 0.22 μm filter. The fragments were verified as >99% pure by SDS-PAGE and stored at −80 °C.

ELISA plates (96-Well Medium Binding, Greiner bio-one) were coated with solutions of 100 nM of human plasma fibronectin (Sigma), human vitronectin (Peprotech), human tenascin C (R&D Systems) or human fibrinogen (Enzyme Research Laboratories) in PBS for 1 h at 37 °C. Wells were washed with washing buffer (PBS-T, PBS with 0.05% Tween-20) and blocked with 1% BSA in PBS-T for 1 h at room temperature. Then, wells were incubated with 100 nM of GST-fused PlGF fragments (in PBS-T with 0.1% BSA) for 1 h at room temperature. GST (100 nM) only was used as a negative control. Wells were washed three times with washing buffer and incubated with 0.1 μg/ml of HRP-conjugated antibody against GST (GE Healthcare, RPN1236V) in PBS-T with 0.1% BSA for 45 min at room temperature. Wells were then washed three times with PBS-T and detection was done with tetramethylbenzidine substrate and measurement of the absorbance at 450 nm.

Heparin-binding plates (Corning, #354676) were coated with 25 μg/ml of heparan sulfate (Sigma-Aldrich, H7640) overnight at room temperature and blocked with a PBS solution containing 0.2% gelatin and 0.5% BSA for 1 h at room temperature. Then, plates were washed three times with washing buffer (100 mM NaCl, 50 mM NaAc, 0.2% Tween-20, pH 7.2). GST-fused PlGF fragments (100 nM in PBS with 0.5% BSA) were added and incubated for 1 h at room temperature. Plates were washed three times with the washing buffer and bound GST fragments were detected with HRP-conjugated antibody against GST (0.1 μg/ml in PBS-T with 0.1% BSA; GE Healthcare, RPN1236V). Wells were washed three times with PBS-T and detection was done with tetramethylbenzidine substrate and measurement of the absorbance at 450 nm.

C57BL/6J mouse was humanely euthanised by CO2 overdose and tail was cut off from the base. An incision was made along the midline, throughout the length of the tail from the base to the tail tip and the skin was peeled off from the bone. Tails were rinsed in PBS, cut into 1–2 cm2 pieces and incubated with 2 mg/ml ice-cold dispase II (Sigma) at 4 °C for 10–12 h. Then, skin pieces were washed, and the epidermis along with hair follicles was peeled off. The dermal pieces were minced and digested in with 300 U/ml collagenase II (Sigma) for 30 min at 37 °C. The supernatant was collected and filtered with a 100 μm filter and inactivated with EDTA (5 mM). Cells were centrifuged at 500 g for 10 min and plated on T75 flasks (one flask per tail) in fibroblast media (DMEM with 2 mM GlutaMAX, 1 mM sodium pyruvate, 10% heat-inactivated FBS, 100 units/ml penicillin and 100 mg/ml streptomycin). All cells were used within the first 2–3 passages for experiments.

Back of C56BL/6 mice (8-week old) were shaved and 10 μl of 6x histidine-tagged wild-type (IL-1Ra-His, Sapphire Biosciences) or IL-1Ra/PlGF123–141 in PBS were injected intra-dermally. Injection sites were marked, and mice were euthanised directly after (100% control) or after 1, 3, 5 and 8 days. Full-thickness skin tissue was harvested, and the area of the injection site was collected with a 6 mm biopsy punch. Tissue was transferred into 500 μl of T-PER Tissue Protein Extraction Reagent (Thermo Fisher Scientific) containing a protease inhibitor cocktail (one tablet for 50 ml, Roche) and minced. Samples were incubated for 1 h at room temperature under agitation and centrifugated at 5000 g for 5 min and supernatants were stored at −80 °C. The concentration of IL-1Ra-His or IL-1Ra/PlGF123–141 was determined by ELISA utilising an anti-histidine tag capture antibody (Abcam, ab18184) and a detection antibody from IL-1Ra/IL-1F3 and PDGF-BB DuoSet ELISA kit (R&D Systems). The percent retention was calculated using the day 0 concentrations as the 100%.

In vivo phenotyping of neutrophils and macrophages

Mice (12-week old) were wounded as described above and euthanised after 6, 9 and 14 days. The back skin was excised and wounds were harvested with an 8 mm biopsy punch and placed into RPMI media 1040 (Gibco) and 2% BSA. Wounds were minced with scissors and digested with collagenase XI for 30 min at 37 °C. Enzymatic digestion was neutralised with 5 mM EDTA and the mixture was passed through a 70 μm cell strainer. Single-cell suspensions were stained for 20 min on ice using antibodies from Biolegend (2 μg/ml): BV711 anti-F4/80 (clone BM8), biotin anti-CD11b (clone M1/70), PE-Cy7 anti-CD206 (clone C0862C), BV421 anti-Ly6G (clone 1A8). UV379-streptavidin was from BD Biosciences. Fixable live/dead viability staining was done using Zombie Aqua Fixable Viability Kit (Biolegend). All flow cytometry was performed on a BD LSRFortessa X20 flow cytometer and analysed using FlowJo (BD Biosciences).

Measurement of surface electrical capacitance was used to evaluate the integrity of the skin barrier 9 days post treatment with saline or IL-1Ra/PlGF123–141. The back skin of non-wounded and shaved Leprdb/db mice were used for baseline measurements. Mice were lightly anesthetised with isoflurane and measurements were performed using a dermal phase metre (NOVA DPM 9003, NOVA Technology Corporation, Portsmouth, NH, USA). The dl0 = instantaneous reading mode was used and the device probe was placed on the wound area. The final readings were given in dermal phase metre arbitrary units (a.u.), ranging from 90–999.

All data are presented as means ± SEM. Statistical analyses were performed using GraphPad Prism 8 statistical software. Significant differences were calculated with Student’s t test or by analysis of variance (ANOVA), followed by the Bonferroni post hoc test when performing multiple comparisons between groups. P < 0.05 was considered as a statistically significant difference. The symbols *, ** and *** indicate P values less than 0.05, 0.01 and 0.001, respectively; n.s., not significant.