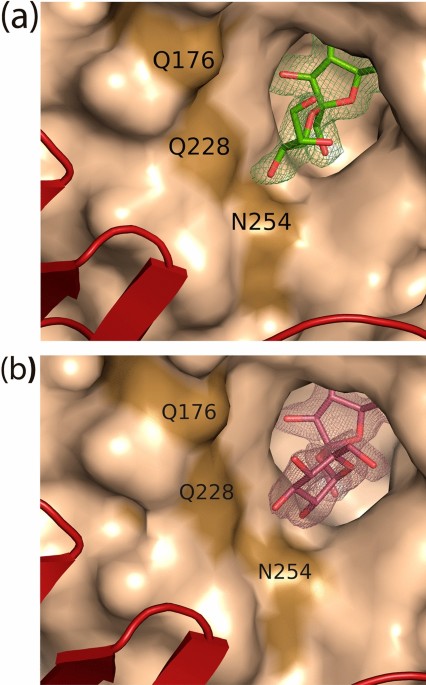 As explained before, the crystallographic study of the Ffase homodimer and its subsequent evaluation by site-directed mutagenesis disclosed the key determinants for its transfructosylating activity with sucrose. The pair Gln-228/Asn-254, and to a lesser extent Gln-176/Arg-178, was found to have an important role for regulating the biocatalytic capacity of this enzyme as well as controlling its specificity for FOS production4,5. In this context, further structural research was undertaken to understand the ability of Ffase to use sucrose-alternative compounds as fructosyl-acceptors and generate derivatives from the alditols mannitol and erythritol1. To this aim, the inactivated mutant Ffase-D50A was expressed in Saccharomyces cerevisiae, purified, and crystallized as previously referred4. The resultant protein crystals were then soaked within β-fructose plus either mannitol or erythritol to obtain the corresponding intermediate complex with these two molecules. Unfortunately, only fructose was bound at the active site in both experiments. Thereby, the enzyme was directly incubated with purified fructosyl-mannitol or fructosyl-erythritol to obtain the corresponding complex, and was submitted to crystallization experiments. Data collection and structure determination of these crystals are shown in Table S1. The formation of Ffase-D50A/fructosyl-erythritol complex was clearly detected (Fig. 1a). However, only sucrose was observed in crystals grown in the presence of fructosyl-mannitol (Fig. 1b), most probably due to traces of this disaccharide in the purified product. Experimental details of the crystal structure determination of both complexes are given in Table S1.

Figure 2a shows a detail of the fructosyl-erythritol recognition pattern within the Ffase active center. The fructo-conjugate is spanning subsites − 1 and + 1 in the expected product binding mode. On the one hand, the fructose bound at subsite − 1 is fixed by many direct polar interactions of all its hydroxyl groups and the ring oxygen to Asn-49, Gln-68, Trp-76, Ser-111, Arg-178, and Asp-179 amino acid side-chains. A water molecule is occupying a position close to the missing nucleophile carboxylate acting as a link between O1 of fructose and the Ala-50 NH main-chain. This binding mode is highly conserved within the GH32 enzymatic family and determines its specificity for fructo-based substrates. On the other hand, the erythritol moiety is accommodated by polar interactions between the secondary hydroxyl group next to the fructosyl linkage and the catalytic Glu-230 and to Asn-254 side-chains. Furthermore, as it is described in more detail below, the terminal primary hydroxyl is linked to Gln-147 through a well-ordered water molecule that participates in a network connecting residues in the surroundings of the catalytic site.

Figure 2b illustrates in detail the binding mode of the sucrose donor substrate. The fructose located at − 1 presents the same atomic interactions described above and conserved within the GH32 family. For its part, the glucose at + 1 is recognized through a complex net of direct and water-mediated polar linkages. First, there is a bifurcated hydrogen bond between both oxygens from the catalytic Glu-230 carboxylate to the O2 and O3 of glucose, these atoms in turn being also linked to Gln-228 and Asn-254 side-chains, respectively. Moreover, the glucose O4 is linked through two water molecules to Gln-147, Gln-176, and Gln-228. Consequently, the pair Gln-228/Asn-254, previously defined as a hotspot for regulating the transfructosylated product specificity, is also directly involved in the donor-sucrose binding, which necessarily must influence the first step of the enzymatic mechanism with alternative acceptors. Moreover, the Ffase-sucrose complex shows several long-chain residues in the environment of the catalytic Glu-230 that make a complicated network of polar linkages, keeping a tight architecture at this part of the catalytic site. Thus, in addition to Arg-178 at the conserved RPD motif, Gln-176 and Gln-228 are making an intricate polar net for keeping Glu-230 side-chain in a very precise conformation and for stabilizing the binding of sucrose.

As the soaking experiment to obtain Ffase-D50A/fructosyl-mannitol complex failed, a docking simulation of the fructosylated derivative into the Ffase active site was performed using AutoDock Vina. From the 20 calculated conformers, the first energy-ranked solution presented the more conservative binding of the product at subsite − 1, as compared to the Ffase-D50A crystallographic complexes with fructosyl-erythritol and sucrose here reported. As it is shown in Fig. 2c, fructose keeps essentially the same polar interactions at its hydroxyls with the residues Asn-49, Gln-68, Trp-76, Ser-111, Asp-179 and Trp-314 at the Ffase active site, therefore supporting the calculated complex model. Furthermore, an inspection to the figure shows that mannitol is tightly fixed at subsite + 2 by many polar interactions of its O2 to the Gln-228 and Ans-254 side-chains, its O4 and O6 to Gln-288, the O6 being additionally linked to Gln-176 and Arg-178 in the complex net of polar interactions linking Glu-230 to Arg-178 and Gln-176, described above. It should be noted that some conformational changes are observed in the modelled positions of these residues, which highlights their putative role in accommodating mannitol.

On the basis of these structural features, the catalytic effect induced by changes in positions Gln-176, Gln-228, or Asn-254 on the production of fructosylated alditols was revised. The final goal was to explore the potential use of the variants to enhance the biotechnological applicability of Ffase.

Native Ffase directly purified from Sw. occidentalis and incubated at 50ºC for 2 h in a reaction mixture containing 200 g l−1 sucrose and 500 g l−1 erythritol produced 35 g l−1 of 1/4-O-β-D-fructosyl-erythritol, this derivative being the major transfer product and accounting for around 5% (w/w) of all compounds thereof1. Considering the major role of Asn-254 in binding the erythritol moiety of the fructosyl-erythritol (Fig. 2a), the production of this compound was evaluated using four different protein variants including substitutions N254D/T/A/E, which had previously been expressed in S. cerevisiae and showed capacity to produced FOS, mainly 6-kestose from sucrose4. Recombinant proteins were first purified and then incubated in reaction mixtures under the same experimental conditions already mentioned that were concomitantly followed by HPLC-ELSD. As expected, clear peaks corresponding to fructosyl-erythritol were detected in all chromatograms analyzed, which constituted the major product synthesized by the tested variants. Supplementary Fig. S2 shows a couple of representative chromatograms and Table 1 summarizes the level of transfructosylated products at the reaction time in which a maximum amount of fructosyl-erythritol is obtained. After 3 h, wild-type Ffase produced 37.2 g l−1 of fructosyl-erythritol (5.3% of the total amount of all compounds in the reaction mixture) and 3.7 g l−1 of FOS (of which 62% was 6-kestose).

Enzymatic variants including substitutions N254E and N254A showed very small hydrolase and transferase activity, both producing 10.5 and 6.6 g l−1 of fructosyl-erythritol, respectively, values that decay to 9.7 and 6.5 g l−1 after 4 h (data not shown). In addition, neither of these two variants generated any type of FOS under these conditions, highlighting the importance of residue N254 in the recognition of substrates/products and hydrolysis that we had previously described by using fructans of different chain size4. However, the variant Ffase-N254D basically maintained the wild-type fructosyl-erythritol production level after 2 h, but with a reduction in the total amount of FOS by almost 60%, 1.1 versus 3.7 g l−1 (Table 1 and Fig. 3), which increased the fructosyl-erythritol/FOS ratio by 3.3-fold. In contrast, the N254T mutant enhanced both, production of fructosyl-erythritol and FOS by (sim) 30% (48.8 g l−1) and 48% (5.5 g l−1), respectively. As previously reported when using reactions based exclusively on sucrose4, the N254T substitution produced a slight shift on the Ffase activity towards the production of neokestose, which in reactions including erythritol represented (sim) 27% of the total FOS produced versus the (sim) 16% of the wild-type enzyme.

In addition, in the chromatograms obtained with the N254T variant, peaks corresponding to small traces (< 0.1 g l−1) of the disaccharide blastose and to a new product that very probably could be fructosyl-fructosyl-erythritol were also detected (see Supplementary Fig. S2 online). In fact, analysis of the reaction mixture by MS showed a clear peak of [M + Na]+ m/z of 469.2 (Supplementary Fig. S3 online), which may correspond to the double fructosylation of erythritol. Unfortunately, the low generated amount of the proposed fructosyl-fructosyl-erythritol did not allow its structural characterization by nuclear magnetic resonance techniques. A schematic view of the reactions mediated by the variant Ffase-N254T with erythritol is represented in Fig. 4.

Native Ffase is able to fructosylate glucose to produce blastose disaccharide whose sugar units are connected by a β-(2–6)-linkage1,2. The relevance of position Asn-254 in the product specificity of Ffase and the shift of the Ffase-N254T variant towards production of neokestose, a neo FOS with a β-(2–6)-linkage between fructose and the glucosyl moiety of sucrose (Fig. 4), was already demonstrated4. In this work, the potential of the N254T variant to synthesize blastose was analyzed in detail using 200 g l−1 of sucrose (fructosyl donor) and 600 g l−1 of glucose (fructosyl acceptor). The largest amount of blastose detected in these conditions after 3 h was 31.8 g l−1, which represented 82.4% (w/w) of the total amount of transfructosylated products in the reaction mixture (Fig. 5) and 4% of the total compounds in the mixture. At this time, the highest concentration of FOS was found to be 3.9 g l−1 neokestose and 2.8 g l−1 6-kestose. 1-Kestose was not detected in any of the HPLC chromatograms analyzed using Ffase-N254T variant under these conditions, which again clearly indicates that its product specificity is altered towards the formation of β-(2–6) bonds to the detriment of the β-(2–1)-linkages. By contrast, wild-type Ffase produced 14.6, 4.4, and 2.2 g l−1 of blastose, 6-kestose, and 1-kestose, respectively, without detection of neokestose.

Assessment of Ffase Q176 and Q228 variants for fructosyl-mannitol synthesis

Mannitol is, as afore-mentioned, one of the best-known Ffase fructosyl-acceptors. The enzyme was previously shown to produce 43.8 g l−1 of fructosyl-mannitol (7.3% of the total amount of all compounds present in the mixture) after incubation with 200 g l−1 sucrose and 400 g l−1 mannitol for 1.5 h1. Our failure in getting crystals with this product led us to explore other considerations to identify putative residues regulating this process. Interestingly, the structural study of the Ffase/sucrose complex described here (Fig. 2b) highlighted the key role of Gln-176 and Gln-228 in fixing the position of the acid/base catalyst Glu-230 carboxylate, Gln-228 also making a direct hydrogen bond to the substrate. Moreover, the computed model of the complex calculated with AutoDock Vina points to the direct implication of these two residues in accommodating the mannitol moiety of the fructosylated product through several polar interactions (Fig. 2c). Therefore, various changes in these two positions were investigated vs the mannitol acceptor so as to explore possible trends in the fructosylation of this molecule. For this purpose, seven different Ffase Q176 or Q228 variants were independently incubated for 3 h in the presence of 200 g l−1 sucrose and 400 g l−1 mannitol, and the resultant compounds so generated were quantified (Table 2). In all assays, the main transfer product of the reaction was β-D-fructosyl-D-mannitol, together with 6-kestose, which constituted the major trisaccharide produced by self-transfructosylation of sucrose. Despite the fact that all tested variants produced fructosyl-mannitol, none of them significantly improved the values reached by the wild-type enzyme used as a control, which generated 38.4 g l−1 of fructosyl-mannitol and 12.2 g l−1 of total FOS, when about 80% of the initial sucrose has been consumed. At best, the Q228E variant produced a slight (sim) 8% increase in the level of fructosyl-mannitol, but without substantial change in the ratio fructosyl-mannitol/FOS. Substitutions Q228T and Q228V showed a clear reduction in the hydrolytic activity, and consequently, both of them decreased the total synthesis of fructosylated products (including FOS and fructosyl-mannitol). Neokestose production was not detected using any of the tested Q228 variants and 1-kestose was only observed for the case of Q228N, which again demonstrates the importance of this position in the product specificity of Ffase. On the contrary, every Ffase-Q176 variant assayed so far showed synthesis of 1-kestose, and Q176N even catalyzed the formation of small traces of neokestose; albeit the total amount of FOS was somehow reduced in all three enzymatic versions. The Q176E substitution caused the greatest reduction in the production of FOS ((sim) 3.4-fold) without affecting significantly the synthesis of fructosyl-mannitol (37.7 versus 38.4 g l−1) and increasing the ratio fructosyl-mannitol/FOS by (sim) 3.4 times (10.6 versus 3.1).