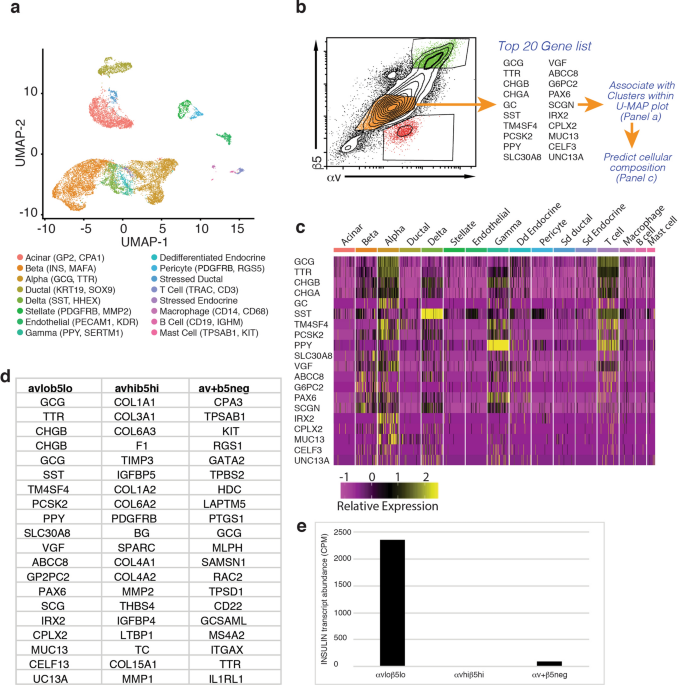 We examined the gene expression profile associated with each cell cluster with a view to identifying potential cell surface markers that could be used to quantify islet composition using live cell techniques, such as flow cytometry. We paid particular attention to members of the integrin family, some of which have been previously associated with pancreatic endocrine development8 and functionality of adult beta cells19. This analysis demonstrated that the integrin subunit αv was expressed in the endocrine cells of the pancreas. Subsequent analysis of publicly available RNAseq data showed that of the potential heterodimerisation partners, islets expressed beta chains 1, 3, 5 and 6 (Supplementary Fig. 3c,d). As expression of β1 has already been examined in the adult islet, we focussed on the next most highly expressed beta subunit, β5.

In order to examine how the expression pattern of αv and β5 proteins related to the pattern suggested by RNAseq analysis, we used FACS to isolate specific islet subpopulations. Flow cytometry analysis showed that the vast majority of islet cells expressed some level of both the αv and β5 subunits. Islets also contained a smaller population that exclusively expressed the αv subunit (Fig. 1b). Using our analysis of single cell sequencing data as a guide, we purified populations expressing both subunits from isolated human islets and subjected these to bulk RNAseq analysis. As a point of reference, we also isolated a population of cells that only expressed the αv subunit, predicted to contain haematopoietic cells (See Supplementary Fig. 4).

Mapping the 20 most highly expressed genes in each isolated cell fraction to the gene expression profiles associated with specific cell clusters identified by scRNAseq analysis enabled us to estimate the cellular composition of the isolated cell populations (Fig. 1c–e). These associations can be visualised by means of a heat map (Fig. 1c and Supplementary Fig. 4). This analysis suggested that the αvloβ5lo population was enriched for endocrine cell types including alpha, delta and gamma cells (Fig. 1c–e) whilst the αvhiβ5hi population was enriched for pericytes and stellate cells (Supplementary Fig. 4b). Interestingly, the αv+β5neg reference population appeared to be enriched for myeloid cells, most likely mast cells (Supplementary Fig. 4a).

To complement our RNAseq and flow cytometry analyses, we performed immunofluorescence staining on human pancreas from both control and T1D donors (Fig. 2, Supplementary Fig. 5). Consistent with our flow cytometry analysis, αv was found to be expressed throughout the islets; a pattern that was apparent in tissue from both control and T1D donors (Fig. 2a). Similarly, immunofluorescence analysis showed that β5 was expressed in endocrine cells (Fig. 2b), in addition to being present within endothelial and pericyte populations (Supplementary Fig. 6). Immunofluorescence labelling also enabled us to examine the distribution of αvβ5 heterodimer using an antibody that specifically detects this complex. This analysis suggested that expression of the αvβ5 heterodimer was restricted to beta cells (Fig. 2c), as defined by the expression of INSULIN. In order to quantify the co-localisation of the αvβ5 heterodimer with either INSULIN or GLUCAGON in the islets of a control donor, we performed co-localisation analysis using the coloc2 plugin within ImageJ. This enabled us to calculate the Pearson’s correlation coefficient for the proteins in question and to provide a quantitative measure of co-expression. From this analysis, we found that the mean Pearson’s correlation coefficient for INSULIN and αvβ5 heterodimer was 1.00194 (Range 0.9434–1.0646, n = 5) indicating that these two proteins are indeed co-expressed. In contrast, we found that the mean Pearson’s correlation coefficient for GLUCAGON and αvβ5 heterodimer was 0.0001 (Range − 0.286 to 0.198, n = 4) affirming that there is no co-expression of these two proteins in the islets of control donors. To enable quantification of the relationship between insulin and αvβ5 expression within islets, we examined four fields of view at 5× magnification from sections representing three control donors and 3 T1D donors that had been stained for insulin, glucagon and αvβ5. We counted the number of islets (defined by clusters containing cells that expressed insulin and glucagon) and scored them for the co-expression of αvβ5. This analysis showed that all islets expressed αvβ5 irrespective of whether they were from a control or T1D donor. Furthermore, we also identified clusters of αvβ5 expressing cells and scored these for the presence of insulin. As expected, for control donors, this analysis showed that there were no examples of αvβ5 expressing cell clusters that did not also express insulin. Conversely, in a subset of sections derived from T1D donors, we found rare instances of αvβ5 cell clusters that lacked insulin expression (Supplementary Fig. 7). In these cases, clusters of insulin negative αvβ5 positive cells also expressed glucagon, consistent with the possibility of trans-differentiation of beta cells within the islets of individuals with type 1 diabetes20 (Donor T1D-2, Fig. 2c, see Supplementary Fig. 3c for additional donor samples). We also examined expression of other αv heterodimers—αvβ1 and αvβ6. However, using validated commercially available antibodies, we were unable to detect specific expression of either heterodimer within the pancreas for either control or type 1 diabetic donors (Supplementary Fig. 8).