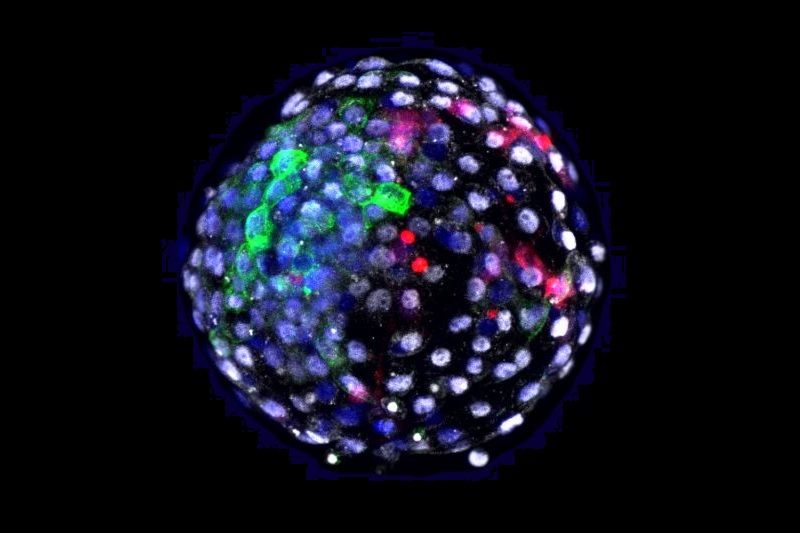 Scientists use different models to study human disease when it would be too early or ethically problematic to run experiments in humans. Those models aim to mimic human biology as closely as possible to allow more accurate results.

Furthering that goal, investigators from the Salk Institute for Biological Studies and China’s Kunming University of Science and Technology injected human stem cells into monkey embryos, resulting in chimeric embryos that survived in lab dishes for up to 20 days.

The development, published in Cell, offers a new tool for conducting medical research and discovering therapeutics, the researchers said. It could provide fresh insights into early human development, disease onset and progression and aging as well as lay the groundwork for new models of human biology for drug experiments. It could also address the need for transplantable organs, the researchers suggested.

But the approach raises ethical questions that may not be easily answered.

For the current studies, the researchers used cells called human extended pluripotent stem (hEPS) cells from an induced pluripotent stem cell line, which was made by reprogramming mature skin or blood cells into a stem-cell-like state. The hEPS cells have the potential to transform into both embryonic and extra-embryonic tissues. Some members of the team had successfully integrated such hEPS cells in mouse embryos in earlier experiments.

This time, the researchers injected 25 hEPS cells labeled with a fluorescent protein into macaque embryos. After one day, human cells were detected in 132 embryos.

Thanks to a recent technical advance, the researchers were able to grow the embryos over a long period of time. After 10 days, 103 of the chimeric embryos were still developing. Although cell survival sharply declined after that, three chimeras were still left by Day 19.

The researchers then analyzed RNAs from both the human and monkey cells in the chimeric embryos to determine how they transcribed DNA. They found several communication pathways that were novel or strengthened in the chimeric cells compared with human or monkey controls. The researchers hypothesized that modulating these pathways in hPSCs or cultured embryos may improve the efficiency of chimeric integration.

“Understanding which pathways are involved in chimeric cell communication will allow us to possibly enhance this communication and increase the efficiency of chimerism in a host species that’s more evolutionarily distant to humans,” explained senior author and Salk Professor Juan Carlos Izpisua Belmonte, Ph.D., in a statement.

With such insights, researchers could obtain an unprecedented glimpse into the early stages of human development, the researchers suggested. Chimeric organisms with human cells could be used to generate cells and organs for transplantations. They could also offer unique insights into aging, allowing scientists to investigate how different organs perform during aging and what signals are involved in their survival, the team said.

Chimeras bearing human cells could also potentially serve as excellent models of human disease for which to test drug candidates, the researchers added.

The Salk-led team specified that their study followed existing rules and standards and that their protocol was approved by several bioethicists. But as Stanford bioethicist Henry Greely and Duke University bioethicist Nita Farahany, Ph.D., pointed out, the new research is pushing the limits of existing thinking about ethics.

Transplanting human cells into particular regions of monkeys allows researchers to predict how the cells might evolve. But with hEPS cells placed in embryos, the human cells may differentiate into “morally sensitive cell types” such as those of the brain, Greely and Farahany noted. Currently, most jurisdictions still apply the 14-day rule that forbids any cell culture study of human embryos beyond day 14 of fertilization, partly because that’s around the time neural development begins.

The embryos were not implanted into a uterus and therefore couldn’t generate living chimeric animals. But the idea of mixing human cells with nonhuman cells “provokes strong reactions in many,” the bioethicists wrote. Drug tests in living creatures are believed to more accurately reflect how humans are likely to respond. The new study shows the plausibility of such testing. “We must begin to think about that possibility,” Greely and Farahany said.