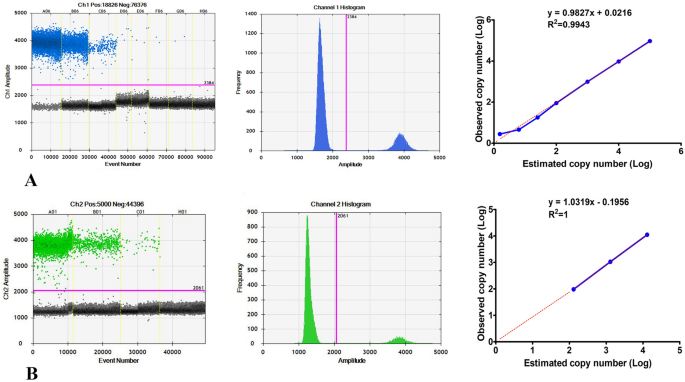 The bacterial strains were propagated and cultured in a 50 ml Luria–Bertani bacterial culture medium. A total of four strains of bacteria were used in the study, S. aureus ATCC25923, S. aureus ATCC29213, E. coli ATCC25922, and a strain of E. coli named E. coli-clin extracted from a patient. According to the methods suggested in the manufacturer’s instructions, nucleic acids were extracted from the four bacteria using the QIAamp cador Pathogen Mini Kit (QIAGEN, Germany). We used Nanodrop to measure the extracted nucleic acid concentrations and stored samples at –20 °C.

Design of primers and probes

The specific genes of bacterial strains were selected according to the GenBank database. The specific genes of E. coli and S. aureus were SWG-9 and coagulase COA gene, respectively. Primers and probes were designed for conserved regions in SWG-9 and coagulase COA gene sequences (Table S4 and S5). We used Oligo 7.0 and Primer Express 3.0 software to design the primers and probes for the nucleic acid sequence containing the site to be detected. The sequences were delivered to Thermo Fisher Scientific (CN) to synthesize the primers and probes. The 5 ‘end of the E. coli probe was labeled with a 6-FAM fluorescent molecule, the 5′ end of the S. aureus probe was labeled with VIC fluorescent molecule.

Workflow of the ddPCR system

The real-time quantitative PCR system with the MGB probe system was used to quantify the gradient-diluted nucleic acid of E. coli standard strain (ATCC25922) to determine the sensitivity range of the two real-time quantitative PCR. The template dilution gradient (copies/20 µL) of ATCC25922 was 106, 105, 104, 103, 102, 101, 1, and 0. Each group of experiments was repeated three times in parallel.

The blood samples were obtained from the Department of Gastroenterological Surgery, Peking University People’s Hospital. All of the blood sample donors included in this study provided their informed consent. The study was approved by the Human Ethics Committee of the Peking University People’s Hospital (China). The blood collection tube was pretreated with EDTA anticoagulation. Three simulations of bacteremia blood samples were prepared; Group A: 100 μL of the serially-diluted suspensions of E. coli (ATCC25922) were injected into 400 μL of blood treated with EDTA. Group B: 100 μL of the serially-diluted suspension of the S. aureus strain (ATCC25923) was injected into the 400 μL blood treated with EDTA. Group C: 100 µL of the ATCC25922 and ATCC25923 suspensions were diluted into gradients, then added to the blood samples with 400 µL EDTA. Extraction of nucleic acid from bacterial blood specimens was performed as follows: nucleic acid from bacterial blood specimens was extracted using a bacterial nucleic acid kit (Qiagen, Germany). We used 50 µl of solution buffer to elute DNA from the column and stored it at 80 °C. The extracted nucleic acid was detected using the ddPCR system. Repeat the test three times in parallel.

The detection results were statistically analyzed using SPSS 22.0, GraphPad Prism 5, and OriginPro 2016 software, and the linear dynamic range of the method was measured by R2 value.

Ethics approval and consent to participate

The present study was approved by the Human Ethics Committee of the Peking University People’s Hospital (China) and written informed consent was obtained from all subjects. Methods were carried out in “accordance” with the approved guidelines.