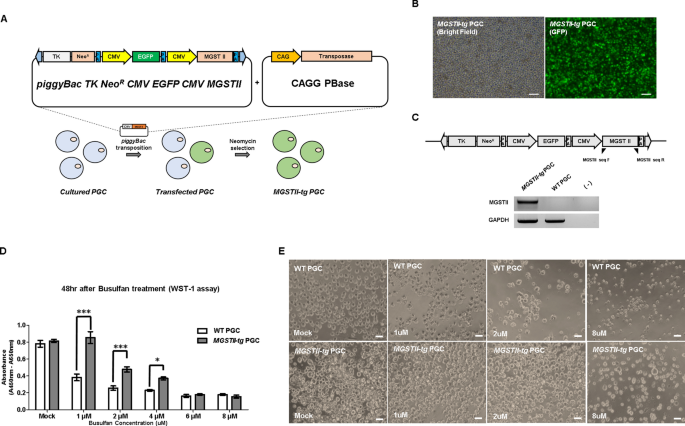 Transfection and G418-selection of PGCs

WT and MGSTII-tg PGCs were incubated at 50,000 cells per well in 96-well tissue culture plates with varying concentrations of busulfan (1, 2, 4, 6, and 8 μM, Sigma-Aldrich) dissolved in dimethyl sulfoxide (DMSO). To assess the busulfan resistance of MGSTII-tg PGCs, cells were incubated in the specified concentrations of busulfan for 48 h. After incubation, cell viability was assessed using the WST-1 method (Roche Diagnostic, Basel, Switzerland). Briefly, WST-1 was added (15 μL/well) and cells were incubated for 4 h. The absorbance (A450-A650) of formazan dye produced by metabolically active cells was detected using an Epoch microplate reader (BioTek, Winooski, VT, USA).

To produce germline chimeric chickens through injection of MGSTII-tg PGCs into recipient embryos, we made a small hole at the pointed end of each recipient KO egg at Hamburger and Hamilton (HH) stages HH13–16, and microinjected a 2 μL aliquot containing at least 3,000 MGSTII-tg PGCs into the dorsal aortas of recipient embryos. Egg holes were sealed with paraffin film, and eggs were incubated with the pointed end down prior to further screening and eventual hatching. To assess the effect of busulfan on MGSTII-tg PGCs, approximately 1,000 GFP-tg PGCs, as generated in our previous report17, or MGSTII-tg PGCs were injected with 1 μM busulfan solution at HH13–16. Three days after transplantation, the gonads from a sample of the recipient embryos were collected at HH 28, and the presence of GFP-expressing PGCs in the gonads were imaged by fluorescence microscopy (Nikon) and manually counted.

PCR analysis and identification of the transgene integration site

The procedures of testis section and immunostaining were followed by our previous report47. Adult testes of WT chickens and busulfan-treated or untreated germline chimeric chickens were paraffin-embedded and sectioned (thickness, 10 μm). After deparaffinization, sections were washed three times with 1 × phosphate-buffered saline (PBS) and blocked with a blocking buffer (5% goat serum and 1% bovine serum albumin in PBS) for 1 h at room temperature. Sections were then incubated at 4 °C overnight with a rabbit anti-GFP primary antibody (Invitrogen, Carlsbad, CA, USA) (1:200 dilutions in blocking buffer). After washing three times with PBS, sections were incubated with fluorescence-conjugated secondary antibodies (Alexa Fluor 594 or 488, Invitrogen) for 1 h at room temperature. After washing three times with PBS, sections were mounted with Prolong Gold antifade reagent with DAPI and imaged using a confocal fluorescence microscope (Carl Zeiss Inc, Oberkocken, Germany).

All experimental procedures and care of chickens was approved by the Institute of Laboratory Animal Resources, Seoul National University, and all methods were carried out in accordance with ARRIVE (Animal Research: Reporting of In Vivo Experiments) guidelines and approved by the Institutional Animal Care and Use Committee (IACUC, SNU‐190,401‐1–1) of Seoul National University, Korea.