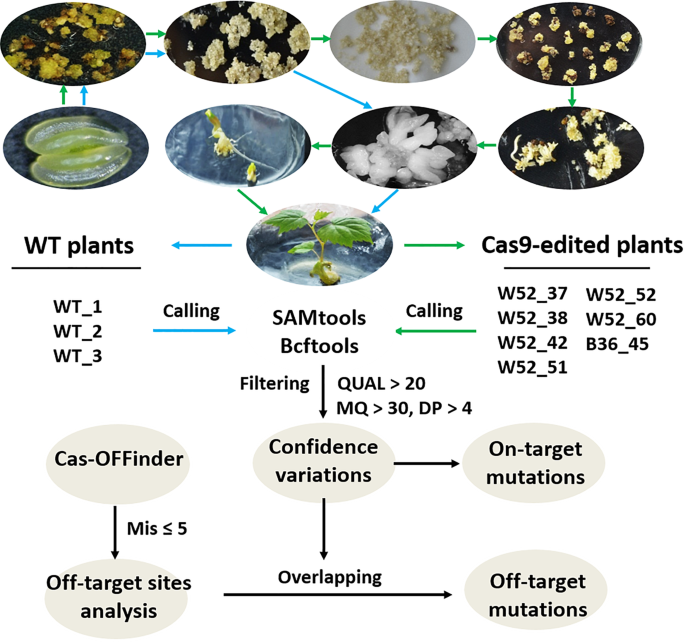 Recently, we established an efficient CRISPR/Cas9 genome editing system in grapevine and obtained 22 VvWRKY52 mutant plants from 72 T-DNA-inserted transgenic plants12. Here, we designed four CRISPR/Cas9 sgRNAs based on the sequence of VvbZIP36, a gene that has been shown to play a role in drought stress responses47 and obtained one mutant grapevine plant. The Agrobacterium-mediated genetic transformation process used is shown in Fig. 1. In our previous study, we analyzed six potential off-target sites from 12 transgenic VvWRKY52 lines with biallelic mutations for off-targets using target sequencing. No off-target mutations were identified12, but the method used has a limited detection range. To comprehensively evaluate potential off-target effects on a genome-wide scale, we performed WGS of six VvWRKY52 lines with biallelic mutations, as well as one VvbZIP36 mutant and three WT (cv. Thompson Seedless) plants. The sequencing depth was approximately х58–х67. The sequencing depth of each independent line is listed in Table S3. For each gene, four sgRNAs were designed, as shown in Table S1. Three WT plants (control) were regenerated from embryogenic calli, and pro-embryonal masses (PEMs) were induced by floral explants (Fig. 1).

In our previous study, we tested on-target site mutations in four sgRNAs (sgRNA1, 2, 3, and 4) of Cas9-edited VvWRKY52 lines by Sanger sequencing12. The results showed that the efficiency of gene editing was 28%, 6%, 17%, and 25% for the four sgRNAs. As a result, we obtained a total of 22 mutant plants from 72 T-DNA-containing transgenic plants12. After identifying the targeted mutations, we selected 6 lines (W52_37, 38, 42, 51, 52, and 60) with biallelic mutations for use in WGS. In this study, we also designed four sgRNAs (sgRNA5, 6, 7, and 8) for VvbZIP36 (Table S1) and constructed a CRISPR/Cas9 multitarget vector, which was used for the transformation of Thompson Seedless plants. A total of 85 positive transgenic lines were obtained, of which only one mutant line (B36_45) was identified by Sanger sequencing (Fig. S1), and these lines were selected for WGS.

The WGS data suggested that specific on-target mutations were introduced into CRISPR/Cas9-edited but not WT plants (Fig. 2). We found that three sgRNAs (sgRNA1, 3, and 4) induced on-target mutations in VvWRKY52 and one sgRNA (sgRNA5) induced on-target mutations in VvbZIP36 (Fig. 2). For sgRNA1, we detected five mutation types, including short insertions (+1), short deletions (−1, −3, and −8), and large deletions (−29). For sgRNA4, we detected five mutation types, including short insertions (+1) and short deletions (−1, −2, −5, and −11). For sgRNA5, only one short insertion (+1) was detected. In addition, a 52-bp deletion was detected in W52_38 and W52_52 between sgRNA3 and sgRNA4, consistent with the previous results12. These results indicated that different sgRNAs can induce different types of mutations and that the most common types of mutations are short insertions and deletions, indicating that the CRISPR/Cas9 system can be used for precise genome editing in the grapevine.

SNP and indel analysis in WT and Cas9-edited plants

To identify possible off-target mutations, the eight sgRNA sequences were aligned with the grape reference genome using Cas-OFFinder software44. Potential off-target sites with ≤5 mismatches in the sgRNAs were selected for further analysis. These comprised 603 (PAM: NGG), 939 (PAM: NAG), and 1730 (PAM: NGA) potential sites (Fig. 4, Fig. S4, Table 3 and Data S1). In the 7 Cas9-edited plants, we found only one indel variation in W52_52 (Table 3), which is likely due to the off-target activity of the Cas nuclease. Subsequently, Sanger sequencing was used to confirm this off-target mutation (Fig. 5). As reported previously, the types of mutations caused by the CRISPR/Cas9 system are often short insertions or short deletions13. Interestingly, the only off-target mutation we found was a 35-bp insertion (Fig. 5). These results suggest that the application of CRISPR/Cas9 to grapevine is highly specific and that few off-target mutations are generated.