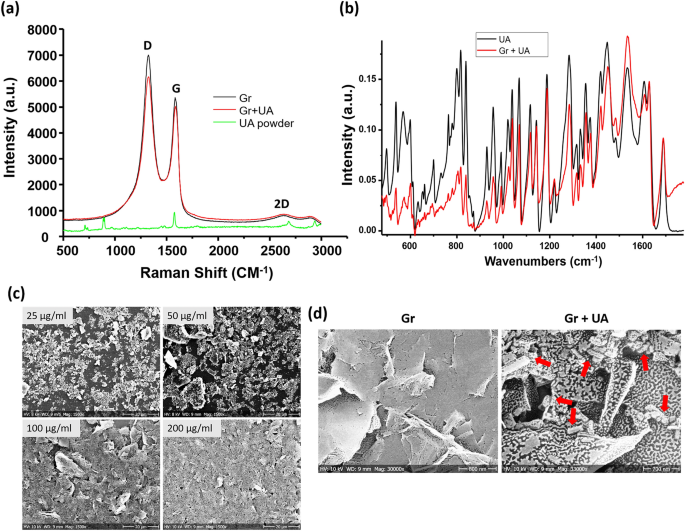 UA was loaded onto graphene by a simple process of mixing in solution, facilitated by ultrasonication. The glass surfaces were coated with different concentrations of UA-loaded graphene. FT-IR, Raman spectroscopy and high-resolution scanning electron microscope (SEM) analysis were used to characterize the structure and morphology of the coatings and to assess the success of UA loading, as presented in Fig. 1. The usual Raman peaks of graphene were detected. The D peak (~ 1326 cm−1) related to defects (edges) and G peak (~ 1585 cm−1) from the sp2 C–C bond denoted the degree of graphitization of material39. The intensity of the D band was observed to be higher compared to the G band, indicating a considerable amount of defects and roughness of the coating surfaces. For both graphene and UA integrated samples, the minor 2D peak was identified, demonstrating the abundance of multilayer graphene in the surface (Fig. 1a)40.

The calculated ratio between the intensities of the D and the G bands (ID/IG) was observed to be slightly higher in the graphene loaded with UA than in pure graphene (Gr is 1.26, Gr + UA is 1.34). This ratio is known to be inversely proportional to the crystallite size of nanographite. This suggests the presence of shorter graphene sheets due to some changes in the amount of defects and hinting to sites where UA attaches.

Sustained release of antibacterial drugs over extended time periods is crucial for long-term antibiofilm protection of biomedical surfaces. Hence, we examined the release pattern of UA loaded onto graphene coatings for up to 7 days, using HPLC (Fig. 2). After the initial burst release, where close to 40 µg of UA were released during day 1, the release of UA remained stable at values ranging between 20 and 30 µg/day. The sustained release of UA from coatings is due to the multiple layers of graphene present on the coated surface, each of which can gradually release UA and due to the slow dissolving rate of crystalline form of UA integrated to graphene. It is previously demonstrated that integration of crystalline UA aggregates in nanomaterials slowly dissolved from coatings to medium or buffer, leading to a controlled and sustained release for longer times41.

Antibacterial effects of our graphene loaded with UA were tested against opportunistic pathogens S. aureus and S. epidermidis. Initially, we tested the bacterial toxicity of graphene flakes loaded with UA in solution, where both the bacterial cells and the graphene-UA flakes are freely floating. Both bacterial strains were grown in the nutrient rich medium with continuous agitation (at 37 °C shaking incubator; 300 rpm), in the presence of different concentrations of graphene-UA flakes. The viability of planktonic bacteria was followed for 24 h of growth (Fig. 3).

Previous reports of UA toxicity against S. aureus and methicillin resistant S. aureus indicated maximum killing effects up to 8 h of treatment, with no further increase in bactericidal activity between 8 and 24 h35. In our experiments, UA loaded onto graphene flakes had more extended toxicity, with significant killing effect recorded also after 8 h (Fig. 3). The killing effect was directly proportional to the concentration of graphene-UA flakes. The lowest concentration (12.5 µg/mL) of graphene-UA flakes was bacteriostatic for the initial 2–8 h after treatment (Fig. 3a). All other concentrations were bactericidal against both S. aureus and S. epidermidis already from the first time point (2 h), and their bactericidal effects continued for the entire duration of the experiment (Fig. 3a,b). S. epidermidis was observed to be slightly more sensitive than S. aureus (Fig. 3b). Our conclusion was that graphene-UA flakes effectively prevent planktonic growth and are even capable of decimating planktonic bacteria (CFU reduction by log10) within a 24-h period.

Adhesion of bacterial cells and subsequent biofilm formation is one of the great challenges for biomedical devices1,2,42. One promising strategy to reduce the adhesion of bacterial cells and prevent biofilm formation is to protect the surface of biomedical devices by various coatings13,43. The coating strategies reported so far include coatings containing antibiotics, containing nanoparticles with antibacterial effects, containing carbon-based materials, containing antibacterial polymers and finally, coatings made of hybrid nanomaterials loaded with antibacterial molecules43. So far, the major risk associated with coatings containing antibiotics/antibacterial agents is the rapid drug release, which precludes these coatings from delivering long-term antibacterial effects, and increases the risk of resistance development 44,45. To address this drawback, different strategies have been proposed, such as incorporation of antibiotics into a polymeric matrix, integration into nanomaterials, loading onto nanofibers followed by layer-by-layer deposition for sequential and sustained release of antibiotics/antibacterial44,45. Using these approaches, several classical antibiotics, such as gentamycin, vancomycin and rifampicin, have been used for implant coatings as a prophylactic measure against implant-associated infections44,45. An ideal coating system should be able to ensure sustained release of the drug following a two-phase profile: a first stage of burst release, followed by sustained release capable of maintain a local drug concentration above the minimum inhibitory concentration46,47.

Biofilm inhibitory efficiency of our coatings based on graphene loaded with UA was examined with the same two pathogens, S. aureus and S. epidermidis. Bacterial biofilms were grown on coated and non-coated control surfaces for 24 h. Thereafter, viability of bacteria in biofilms was evaluated by CFU counts and live/dead staining (Fig. 4). Coatings containing only graphene, not loaded with UA, exhibited no antibiofilm effects. Considering the fact that graphene flakes in the coating are mainly oriented parallel to the surface, with very few exposed edges (Fig. 1d) is not bactericidal, this result was in line with our expectations and with the available literature17,48. The coatings based on graphene flakes loaded with UA (Fig. 1d) inhibited formation of S. aureus and S. epidermidis biofilms by a factor of > 1000 (3 log10 units) at all tested concentrations (25–200 µg/mL), except for S. aureus at 25 µg/mL (Fig. 4a,b). Beyond 50 µg/mL, the inhibition in biofilm formation was not correlated to increasing concentration of graphene-UA flakes, indicating that a threshold concentration was achieved. A small difference in the sensitivity of S. aureus and S. epidermidis is probably due to the differences of bacterial surface, which is strain dependent. This difference is also reflected in the sensitivity of planktonic bacteria. (Fig. 3). The observed overall reduction in CFU counts (Fig. 4a,b) might be either due to the inhibitory activity on bacterial adhesion or due to the bactericidal activity of released drug from coatings. To distinguish between these two effects, we directly examined the biofilms on coated surfaces by fluorescence microscopy, after staining with live/dead viability stain (Fig. 4c). No dead cells were observed in the absence of UA, and no loss of bacterial adhesion was observed with control graphene coatings (not loaded with UA). The presence of UA in the coatings provoked appearance of dead cells (stained red), but the proportion of live/dead cells remained more or less constant with varying concentration of graphene-UA flakes. The obvious effect of increasing graphene-UA flake concentration was that of detecting fewer attached bacterial cells overall, indicating that these coatings, in addition to killing bacteria, effectively prevent early stages of bacterial colonization of the protected surface (Fig. 4c).

Further, to examine the morphological alterations by UA released from our coatings, biofilms were examined by SEM. Compared to live/dead staining, a similar trend was with the SEM analysis. Non-coated and graphene coated surfaces harboured dense biofilm structures, with some exopolysaccharide matrix (Fig. 5). Very few bacterial cells were detected on surfaces coated with graphene flakes loaded with UA. Surfaces coated with 25 µg/mL flakes harboured a slightly higher numbers of S. aureus microcolonies and aggregated cells (Fig. 5a), compared to S. epidermidis (Fig. 5b). The extent on morphological disruption of bacterial cells was more extensive in S. epidermis, corroborating our findings that this strain is more sensitive to UA. Overall, we conclude that three independent methods: CFU counts, live/dead staining and SEM analysis all conclusively point to a very strong inhibition of S. aureus and S. epidermidis biofilm formation on surfaces coated with graphene-UA flakes.

Since our graphene loaded with UA exhibited close to ideal behaviour in terms of sustained release (Fig. 2)46,47, we asked whether antibiofilm effects of our coatings would also persist for longer time periods. Long-term protection is vital for surfaces of biomedical devices, because the bacterial adhesion and biofilm formation in vivo takes longer time compared to in vitro experimental setups, where large numbers of bacterial cells are inoculated and there is no competition for surface attachment by host cells49.

To evaluate the long-term antibiofilm activity, viability of biofilms on various coatings was examined after 96 h, using CFU counts (Fig. 6a,b). Coatings with graphene flakes loaded with UA at concentrations ≥ 50 µg/ml dramatically reduced the viability of cells in biofilms of both bacterial species. Interestingly, the effect was much stronger than the one we measured after 24 h. Compared to a 1000-fold (3 log10 units) decrease at 24 h, after 96 h the decrease was closer to 100,000-fold (5 log10 units). This observation can be corelated to sustained release of UA (Fig. 2), which effectively prevents biofilm growth for extended time periods.

To further challenge our coatings, next we decided to test their antibiofilm effectiveness after completely removing the initial burst release of UA. To do this, surfaces coated with graphene flakes loaded with UA were primarily exposed to a sterile medium for 24 h. After 24 h, the medium containing primarily release UA was removed. The treated surfaces were then inoculated with a medium containing bacterial cells and incubated to allow for biofilm formation. Biofilm formation was followed by CFU counts and live/dead viability staining (Fig. 7a,b).

After the primary release, coatings with 25 and 50 µg/mL of graphene flakes loaded with UA were not able to inhibit bacterial growth to the extent that was observed when the primary release was present (Fig. 4). However, as shown in Fig. 7a,b, 100 and 200 µg/mL of coating showed full capacity for biofilm inhibition, reducing viable cell counts by > 1000-fold (> 3 log10 units), which was similar to inhibitory effects obtained during primary phase of UA release (Fig. 4). These results were fully confirmed by live/dead staining (Fig. 7c), where coatings with 100 and 200 µg/mL of graphene flakes loaded with UA were almost devoid of bacterial cells and harboured only small microcolonies or individual cells. Overall, our data indicate that graphene flakes loaded with UA provide coatings with excellent antibiofilm properties. They ensure sustained delivery of UA for up to 7 days, offer full antibiofilm protection up to 96 h (Fig. 6a,b) and their antibiofilm activity does not depend exclusively on the initial burst release. Rather, at flake concentrations of 100 µg/mL and above, their residual release, after removal of the burst release, is fully capable of preventing bacterial attachment (Fig. 7). The observed antibiofilm activity is solely due to the sustained release of UA from graphene coatings. The UA is widely known as a strong inhibitor of nucleic acid synthesis in bacteria by disrupting the RNA synthesis pathway35,36. Therefore, antibiofilm activity observed here is potentially due to bacteriostatic as well as bactericidal effect of UA by disrupting the nucleic acid synthesis pathways.