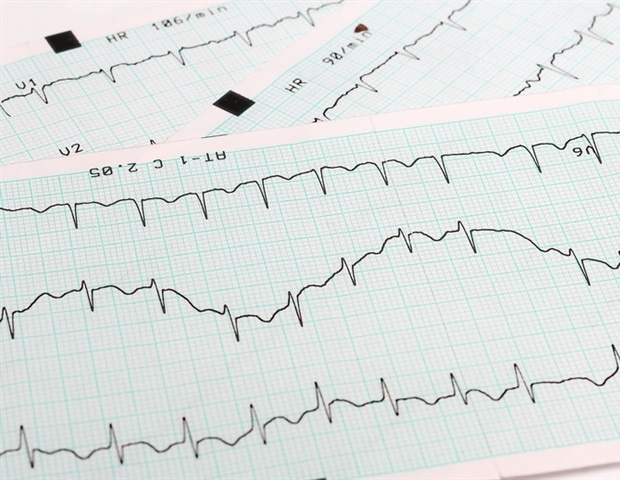 Dozens of commonly used drugs, including antibiotics, antinausea and anticancer medications, have a potential side effect of lengthening the electrical event that triggers contraction, creating an irregular heartbeat, or cardiac arrhythmia called acquired Long QT syndrome. While safe in their current dosages, some of these drugs may have a more therapeutic benefit at higher doses, but are limited by the risk of arrhythmia.

Through both computational and experimental validation, a multi-institutional team of researchers has identified a compound that prevents the lengthening of the heart’s electrical event, or action potential, resulting in a major step toward safer use and expanded therapeutic efficacy of these medications when taken in combination. The team found that the compound, named C28, not only prevents or reverses the negative physiological effects on the action potential, but does not cause any change on the normal action potential when used alone at the same concentrations. The results, found through rational drug design, were published online Friday, May 14 in the Proceedings of the National Academy of Sciences.

The research team was led by Jianmin Cui, professor of biomedical engineering in the McKelvey School of Engineering at Washington University in St. Louis; Ira Cohen, MD, PhD, Distinguished Professor of Physiology and Biophysics, professor of medicine, and director of the Institute for Molecular Cardiology at the Renaissance School of Medicine at Stony Brook University; and Xiaoqin Zou, professor of physics, biochemistry, and a member of the Dalton Cardiovascular Research Center and Institute for Data Science and Informatics at the University of Missouri.

The drugs in question, as well as several that have been pulled from the market, cause a prolongation of the QT interval of the heartbeat, known as acquired Long QT Syndrome, that predisposes patients to cardiac arrhythmia and sudden death. In rare cases, Long QT also can be caused by specific mutations in genes that code for ion channel proteins, which conduct the ionic currents to generate the action potential. Although there are several types of ion channels in the heart, a change in one or more of them may lead to this arrhythmia, which contributes to about 200,000 to 300,000 sudden deaths a year, more than deaths from stroke, lung cancer or breast cancer.

The team selected a specific target, IKs, for this work because it is one of the two potassium channels that are activated during the action potential: IKr (rapid) and IKs (slow).

“The rapid one plays a major role in the action potential,” said Cohen, one of the world’s top electrophysiologists. “If you block it, Long QT results, and you get a long action potential. IKs is very slow and contributes much less to the normal action potential duration.”

It was this difference in roles that suggested that increasing IKs might not significantly affect normal electrical activity but could shorten a prolonged action potential.

Cui, an internationally renowned expert on ion channels, and the team wanted to determine if the prolongation of the QT interval could be prevented by compensating for the change in current and inducing the Long QT Syndrome by enhancing IKs. They identified a site on the voltage-sensing domain of the IKs potassium ion channel that could be accessed by small molecules.

Zou, an internationally recognized expert who specializes in developing new and efficient algorithms for predicting protein interactions, and the team used the atomic structure of the KCNQ1 unit of the IKs channel protein to computationally screen a library of a quarter of a million small compounds that targeted this voltage-sensing domain of the KCNQ1 protein unit.

To do this, they developed software called MDock to test the interaction of small compounds with a specific protein in silico, or computationally. By identifying the geometric and chemical traits of the small compounds, they can find the one that fits into the protein — sort of a high-tech, 3D jigsaw puzzle. While it sounds simple, the process is quite complicated as it involves charge interactions, hydrogen bonding and other physicochemical interactions of both the protein and the small compound.

We know the problems, and the way to make great progress is to identify the weaknesses and challenges and fix them. We know the functional and structural details of the protein, so we can use an algorithm to dock each molecule onto the protein at the atomic level.”

Xiaoqin Zou, professor of physics, biochemistry, and a member of the Dalton Cardiovascular Research Center and Institute for Data Science and Informatics at the University of Missouri

One by one, Zou and her lab docked the potential compounds with the protein KCNQ1 and compared the binding energy of each one. They selected about 50 candidates with very negative, or tight, binding energies.

Cui and his lab then identified C28 using experiments out of the 50 candidates identified in silico by Zou’s lab. They validated the docking results by measuring the shift of voltage-dependent activation of the IKs channel at various concentrations of C28 to confirm that C28 indeed enhances the IKs channel function. They also studied a series of genetically modified IKs channels to reveal the binding of C28 to the site for the in silico screening.

Cohen and his lab tested the C28 compound in ventricular myocytes from a small mammal model that expresses the same IKs channel as humans. They found that C28 could prevent or reverse the drug-induced prolongation of the electrical signals across the cardiac cell membrane and minimally affected the normal action potentials at the same dosage. They also determined that there were no significant effects on atrial muscle cells, an important control for the drug’s potential use.

“We are very excited about this,” Cohen said. “In many of these medications, there is a concentration of the drug that is acceptable, and at higher doses, it becomes dangerous. If C28 can eliminate the danger of inducing Q-T prolongation, then these drugs can be used at higher concentrations, and in many cases, they can become more therapeutic.”

While the compound needs additional verification and testing, the researchers say there is tremendous potential for this compound or others like it and could help to convert second-line drugs into first-line drugs and return others to the market. With assistance from the Washington University Office of Technology Management, they have patented the compound, and Cui has founded a startup company, VivoCor, to continue to work on the compound and others like it as potential drug candidates. The work was accelerated by a Leadership and Entrepreneurial Acceleration Program (LEAP) Inventor Challenge grant Washington University in St. Louis in 2018 funded by the Office of Technology Management, the Institute of Clinical and Translational Sciences, the Center for Drug Discovery, the Center for Research Innovation in Biotechnology, and the Skandalaris Center for Interdisciplinary Innovation and Entrepreneurship.