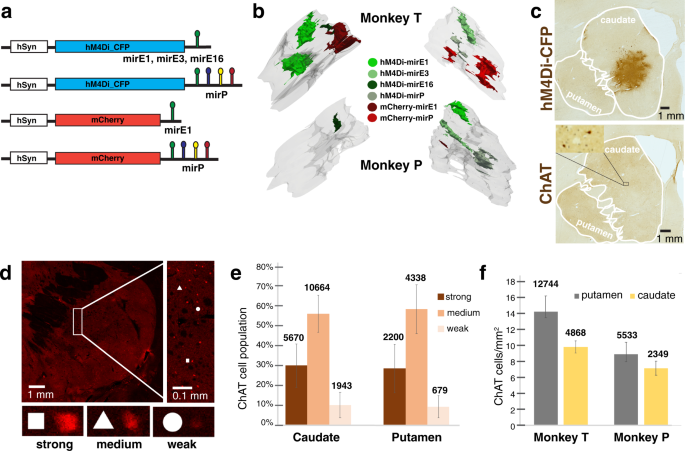 The Designer of Small Interfering RNA algorithm (DSIR) was used to select 21nt long interfering RNA sequences (iRNA) targeting the rhesus ChAT mRNA. The DSIR algorithm produces iRNA that have two-nucleotide overhangs on both ends of the dsRNA. To create fully overlapping 22nt iRNA, the sense strand was modified by subtracting a nucleotide from the 3′ end and adding two bases to the 5′ end. The antisense sequence was modified by adding an overlapping nucleotide to the 5′ end. To create the mismatch corresponding to the endogenous mir-30A, the first nucleotide of the sense strand was changed from C/G->A or A/T->C. The 22nt sequences were then screened against the rhesus genome to eliminate sequences with potential off-target effects. Next, sequences were aligned with four isoforms of the ChAT mRNA. Sequences that did not align with all isoforms were disregarded. Finally, the three iRNA pairs that ranked highest (Supplementary Fig. 1a) were incorporated into the mir-E scaffold.

The polycistronic anti-ChAT iRNA sequences were identified by the DSIR algorithm (Supplementary Fig. 1b). The same elimination steps discussed above were followed and the four most highly ranked sequences were selected and modified to mimic the endogenous mir17-19b [17]. Complete Scaffolds flanked by overlapping sequences of the pLenti-syn::hM4Di-CFP plasmid [3], including restriction site BsRGI and AscI flanking the 5′ and SalI flanking the 3′ end to offer the option of either restriction or In-Fusion cloning (Clontech). The DNA was synthesized and cloned into a pUC57 vector by Genewiz (https://www.genewiz.com). In-Fusion cloning (Clontech) was used to place scaffolds 3′ of the hM4Di-CFP open-reading frame of the pLenti-syn::hM4Di-CFP plasmid, digested with AscI and SalI. MirE1 and MirP constructs were also cloned into the pLenti-syn::mCherry plasmid in which the hM4Di-CFP open-reading frame was replaced by the mCherry open-reading frame via gene synthesis (Genwiz) and in fusion cloning. BrGI was used instead of AscI for digesting the plasmid before Infusion cloning (Clontech).

Lentivirus production was performed as described in [4]. Third generation lentiviral vectors were produced by the co-transfection of 293T cells with pRRLsin backbone construct, helper plasmid (Pax2), pMD2.G, and pAdvantage (Addgene, Cambridge, MA, USA). New medium with Ultraculture (Invitrogen) was used to replace the supernatant after 24 h. The supernatant was collected after 24 h and subjected to ultracentrifugation at 22,000 rpm (Beckman S28 rotor) with a 20% sucrose cushion in PBS. The resulting pellets were resuspended in PBS, aliquoted and stored at −80 °C. The viruses were titered by transfecting 293T using serial dilutions of each viral aliquot and genomic DNA was obtained. A 150 bp lentivirus fragment was amplified and compared to a similar fragment from the endogenous human vasopressin receptor gene (hVAR1) using quantitative PCR.

After a minimum of 6 weeks of recovery, the animals were euthanized following AVMA guidelines. The animals were perfused transcardially with heparinized saline followed by a solution of 4% or paraformaldehyde in 0.1M phosphate buffer. For each case, the brain was removed and cryoprotected through an ascending series of glycerol solutions. The cryoprotected tissue was then frozen in isopentane and serially sectioned (at 40 µm) using a sledge microtome. Series with every tenth section (400 µm apart) of free-floating sections were processed for either histochemistry using the ABC Elite Kit (Vector laboratories PK-6100) or via immuno-visualization of ChAT, AChE, NeuN, and CFP or mCherry reporters. Primary Antibodies: anti-CFP rabbit polyclonal (Abcam ab290), goat polyclonal anti-ChAT (Millipore AB144P), rabbit polyclonal anti-mCherry (Abcam ab167453), goat anti-mouse Alexa 647 (Invitrogen A21235), mouse anti-AChE (Ivitrogen MA3-042). Secondary Antibodies: biotinylated anti-rabbit (Vector laboratories BA1000), goat anti-mouse Alexa 647 (Invitrogen A21235), goat anti-rabbit Alexa 555 (Invitrogen A21428), goat anti-chicken Alexa 488 (Invitrogen A11039), and goat anti-rabbit Alexa 488 (Invitrogen A11008).

Images of the striatum were collected by confocal microscopy using a Zeiss LSM780 laser scanning confocal microscope. The channels selected for visualizing the viral constructs, ChAT cells, and neural cells were 488, 647, and 555 nm, respectively. For each image, the laser power was adjusted accordingly in order to enhance visualization of the neurons. Images used for analysis were taken with a ×5 objective.

Following image collection, the sections were aligned and compiled into stacks using BrainMaker (MBF Bioscience), with 400 µm in between sections. A stack was created for each brain hemisphere of each monkey. The image stacks were then imported into Neurolucida360 (MBF Bioscience) for analysis. The striatal region of interest (caudate or putamen) was outlined using the Contour mode of the program. Area measurements of striatal regions and treated regions were calculated from these outlines by the program. While only visualizing the ChAT channel, markers were used to count and categorize the ChAT positive cells as either strong, medium, or weak. The injection region was similarly outlined using only the relevant channels. ChAT cells within the injection region were also counted and categorized as either having strong, medium, weak, or no viral expression. This process was repeated for all sections within the stacks. 3D reconstructions of each brain hemisphere were created using the 3D environment of Neurolucida360 to visualize the viral expression in the monkey striatum. Movies of the reconstructions are available at: https://doi.org/10.35092/yhjc.12616832.

ChAT positive cells were outlined automatically with U-net and ImageJ. First, images were subjected to segmentation. We adapted a pretrained U-net, which was added to ImageJ as a plugin [19], to outline ChAT positive cells for each monkey. Each training region (2000 × 2000 pixels) and test region (1000 × 1000 pixels) were randomly selected from different sections. For Monkey P, 443 neurons from four regions were manually outlined to train U-net and 149 neurons from four regions were used for testing. For Monkey T, 787 neurons from five regions were manually outlined for training and 117 neurons from five regions for testing. Both training and testing images were black–white inverted by ImageJ. The trained U-net was evaluated with test images by intersection over union (IoU), which measures how well the predicted segments by U-net matches the ground-truth segments labeled by human. Briefly, for each pair of predicted and ground-truth objects, IoU was calculated by dividing the intersection of these two objects by their union [19]. A value of 0 indicates no overlap and 1 indicates exact overlap. For both monkeys, average IoUs were above 0.7 (Supplementary Fig. 2), which indicates a good segmentation [19]. All the sections were then segmented by the trained U-net and individual ChAT positive neurons were outlined by ImageJ (Analyze-Analyze Particles). Each section was inspected carefully to remove false positive “cells” and pickup missed cells. To make ChAT fluorescence intensity comparable across different sections, background intensity of putamen or caudate was adjusted to the same level (about 100). Intensity indicates gray levels of the images or pixels, ranging from 0 to 255 for our 8-bit images. Background intensity was defined as the mean intensity of all pixels in putamen or caudate. For each ChAT positive cell, mean intensity was calculated as averaged intensity of all pixels in the cell body with background intensity subtracted. The area of a cell was defined as the pixel numbers occupied by the cell body. To analyze reporter signals within ChAT positive cells, we transferred all the outlines of ChAT positive cells to the reporter channel. Similarly, intensity of putamen or caudate in reporter channel was adjusted to normalize the background intensity (about 10). Background intensity was defined as the mean intensity of regions removed from the injection site. The mean intensity of reporter signals within ChAT cells were calculated in the same way as for the ChAT signal.

All cell counts and area measurement of each region for ChAT and Reporter categories displayed in Figs. 1–3 are listed in Supplementary Table 1. Cell counts for each region for ChAT or AChE and Reporter categories displayed in Fig. 5 are listed in Supplementary Table 2. Error bars in Fig. 1 represent Standard Deviation of category proportions or cells per area between regions. Chi square values in Figs. 2b, 3b, 5b, c were calculated with help of the R software package (https://www.r-project.org) by first determining the ChAT expression category ratio of all cells in untreated regions and then asking if the cell numbers distributed between the categories in treated regions for each construct resulted in a significantly different category ratio. The asymptotic linear by linear association test was then performed by asking whether the ChAT or AChE ratios were significantly ordered according to RU > RN > RW > RM > RS. R values in Fig. 3c was calculated using a Pearson’s correlation on either strong or weak ChAT ratios ordered according to RU > RN > RW > RM > RS.

The significance between treated and untreated regions in cells per area in Fig. 2c was established by determining the cell density for each region and then testing the densities for treated vs. untreated regions via a Wilcoxon–Mann–Whitney test. No Bonferroni correction was performed.