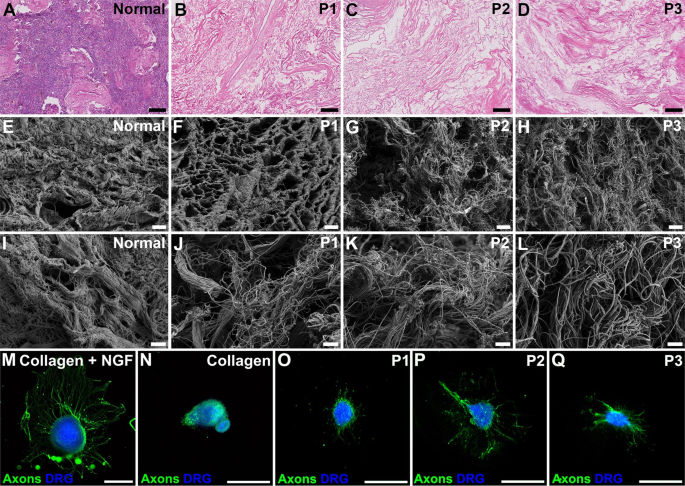 Eighteen sheep uteri of about 35 g each were isolated from 8- to 12-month-old Swedish Finull sheep at a local abattoir. Since the animals were processed for food production, no prior animal welfare evaluation was required for the organ procurement. Each uterus was cannulated, flushed, and decellularized by perfusion through the organ vasculature according to three previously characterized and published protocols30. In brief, P1 was based on the decellularization detergent SDS (0.5%), P2 on SDC (2%), and P3 on a combination of SDC (2%) and Triton X-100 (1%). Each detergent in P1 and P2 was perfused for 8 h, respectively, which was then followed up by the perfusion of deionized water (DW; 26 h), phosphate buffer saline (PBS; 12 h), DNase I (1 h; 37 °C; 8000IU per organ) and then another hour with DW. This cycle was then repeated a second time. For P3, the initial detergent perfusion with SDC lasted only 4 h, which was then followed up by the perfusion of DW (6 h), Triton X-100 (12 h), and then DW (36 h). This cycle was then repeated a second time before the organs in this group were exposed to a 1 h DNase I treatment at 37 °C (8000IU per organ). All organs from P1 to P3 were then washed with DW for an additional 48 h, then sterilized by the perfusion of peracetic acid (1 h, 0.1% in normal saline). The organs were then washed for 48 h in sterile PBS and frozen at −20 °C until used for the experiments mentioned below. The physical attributes of these uterus scaffolds were extensively documented in our earlier publication and were therefore not further assessed herein. To standardize each experiment below, a biopsy punch was used to create multiple full-thickness dUTDs (5 mm in diameter) that were obtained from the uterine body, a few cm proximal to the cervix. Thus, each dUTD contained all uterine layers. All dUTDs were then kept in PBS until used for the experiments described below.

About half of all the dUTDs from each scaffold type were enzymatically treated with MMP2 (2.5 μg/L, Peprotech, Stockholm, Sweden) and MMP9 (2.5 μg/L, Sigma-Aldrich, Gothenburg, Sweden) that had been dissolved and activated according to Sigma-Aldrich instructions using aminophenylmercuric acetate buffer. Each scaffold type was incubated at 37 °C for 24 h in the MMP solution. Each disc was then washed with 20 mM EDTA solution twice, and then with PBS.

Hydroxyproline, the main constituent in collagen, was quantified from 100 mg of homogenized tissue (n = 6 per group). Homogenates were first mixed with NaOH (10 N) and incubated for 1 h at 120 °C. The hydroxyproline content was then measured using a hydroxyproline assay kit (ab222941, Abcam, Cambridge, MA) following the manufactures instructions.

Histology and immunohistochemistry assessment on scaffolds

The Batson’s #17 plastic replica corrosion kit (Polysciences, Eppelheim, Germany) was used to investigate if the MMPs treatment may have negatively affected the patency of the vascular conduits in the scaffolds. Large scaffolds that represented half a sheep uterus with remaining vasculature were cannulated in the uterine artery and perfused with 5 ml of the same MMP solution as used for the dUTDs. The perfused decellularized half sheep uterus was then submerged in the same solution in a 50 ml Falcon tube and incubated at 37 °C for 24 h. Each scaffold was then perfused and washed with 20 mM EDTA solution twice and then with PBS. Polymer resin from the Batson’s kit was mixed according to the instructions and was then immediately injected into the uterine artery. The procedure was filmed and the files attached as supplementary information (Supplementary videos 1–3).

Fertilized chicken eggs (Swedfarm Väst AB, Herrljunga, Sweden) were placed in an egg incubator for 3 days at 37.5 °C and then 3 mL of albumin was removed using a sterile 25 G needle. This detached the CAM from the shell, and then a 1 cm2 window was cut in the shell. The opening was covered with Tegaderm film (3 M Health Care, Minneapolis, Minnesota, USA) before each egg was returned to the incubator. On embryo development day (EDD) 9, the window was re-opened and a dUTD was inserted onto the CAM (P1, n = 5; P1MMPs, n = 6; P2, n = 6; P2MMPs, n = 4; P3, n = 6; P3MMPs, n = 5). A control group was included to evaluate normal blood vessel growth by inoculating a biologically inert reference site on the CAM using a hydrogel drop of 2.2% alginate/PBS (n = 7; 20 μL). The window was again covered with Tegaderm and the egg placed back in the incubator. On EDD 14, the shell was opened further to enable photographing the implant and the embryonic vessels on the CAM under a stereomicroscope. From the photograph of each implant, two rings (0.5–1.5 mm from the center) were digitally inserted in the picture at the biopsy center using ImageJ. The number of vessels was then manually counted in the area between these rings (branching vessels were counted as one) by two individuals, one of whom was blinded to the study. The inter-observer variation was insignificant, and thus, counts were averaged and used for the statistical analyses.

The dUTDs were recellularized with SF-SCs by injecting each disc (n = 20 per scaffold type) with a total of 106 cells in 10 repeated injections using a 30 G needle. The recellularized scaffolds were cultured with the endometrial side positioned upwards using standard cell culturing conditions with medium changed every second day. This group was named RCSC.

Additional dUTDs (n = 20 per scaffold type) were placed individually on transwell inserts (0.4 μm, Sarstedt, Nümbrecht, Germany) in a 24-well plate and were then completely covered with cell culture medium. The transwell inserts improved cell culture medium access to the bottom (myometrial side) of the recellularized scaffold during culture and thereby also the nutritional and metabolite exchange in the deeper compartment of the scaffolds. The cell injections were conducted the same way as mentioned above. This group was named RCTW.

Twenty dUTDs per scaffold type were placed individually in transwell inserts and recellularized and cultured as earlier mentioned. This group was named RCMMP+TW.

Samples assessed by scanning electron microscopy included discs of decellularized-, MMPs treated-, and recellularized tissue. Each specimen was prepared using the osmium tetroxide and thiocarbohydrazide method64, and was imaged with Zeiss Gemini-2 SEM 500 (Carl Zeiss AG, Oberkochen, Germany). The quantification of collagen fiber thickness was performed on images taken at ×50,000 magnification. Each image was opened in ImageJ, the scale was set and the measuring tool in the software was used to measure the width of 25 individual collagen fiber strands in each image.