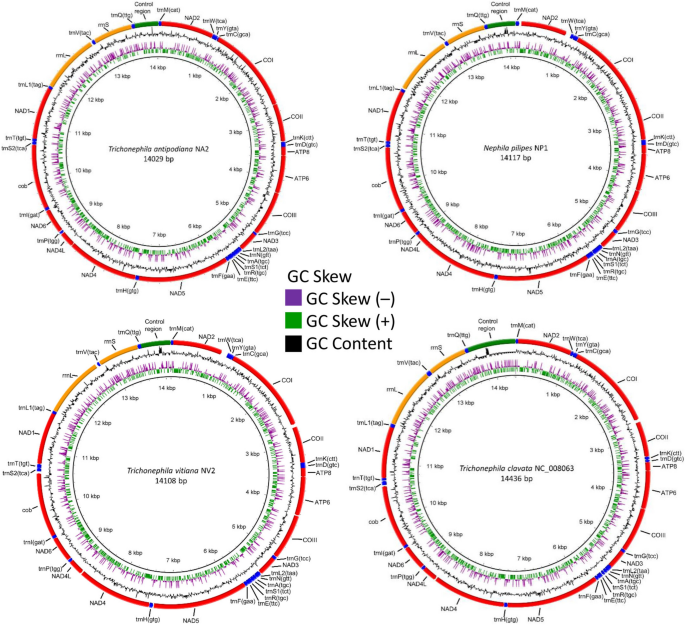 The total lengths of the complete mitogenomes of N. pilipes, T. antipodiana and T. vitiana (previously N. vitiana) are 14,117 bp, 14,029 bp and 14,108 bp, respectively (Table 1; Table S2; Fig. 1). These three mitogenomes are shorter than those reported for T. clavata13. The lengths of Nephila and Trichonephila mitogenomes are similar to those reported for araneoid taxa ranging from 14,032 bp in Argiope perforata14 to 14,687 bp in Cyclosa japonica15 (NC_044696). The complete mitogenome of T. antipodiana has the smallest size compared to those of other araneoid taxa; the shortest so far reported is 14,032 bp in A. perforata. The gene arrangement in Nephila and Trichonephia mitogenomes is identical to those of other araneid spiders included in this study (Table S2; Fig. S1). All the present three mitogenomes (N. pilipes, T. antipodiana and T. vitiana) have 13 PCGs, two rRNA genes, 22 tRNAs, a non-coding A + T rich control region, and a large number of intergenic sequences (spacers and overlaps) (Table 1; Table S2; Fig. 1).

The PCGs of Nephila and Trichonephila mitogenomes are characterized by four start codons: ATA, ATT, TTG and TTA in N. pilipes, T. antipodiana and T. vitiana; ATA, ATT, ATG and TTG in T. clavata (Table 1; Table S2). Two complete stop codons (TAA and TAG) are present in the Nephila and Trichonephila mitogenomes. In addition, T. clavata has a truncated incomplete T stop codon. ATT is the commonest start codon in N. pilipes (8 PCGS), while ATA is the commonest in T. antipodiana, T. vitiana and T. clavata (each with 6 PCGs).

The frequency of individual amino acid varies among the congeners of Trichonephila as well as the genera Nephila and Trichonephila (Fig. 2). However, the most frequently utilized codons are highly similar in these mitogenomes. The predominant amino acids (with frequency above 200) in all the four mitogenomes are isoleucine (Ile), leucine2 (Leu2), methionine (Met), phenylalanine (Phe), serine2 (Ser2), and valine (Val) (Table S4).

Analysis of the relative synonymous codon usage (RSCU) reveals the biased usage of A/T than G/C at the third codon position (Fig. 2). The frequency of each codon is very similar across all the four spider mitogenomes. The Ka/Ks ratio (an indicator of selective pressure on a PCG) is less than 1 for all the 13 PCGs in Nephila and Trichonephila mitogenomes, indicating purifying selection (Fig. 3; Table S5). Similar finding has been reported for 17 spider mitogenomes20. The sequence of the Ka/Ks ratio (cox1 < cox2 < cob < cox3 < nad1 < nad4 < atp6 < nad5 < nad4L < nad3 < nad2 < nad6 < atp8) in Nephila and Trichonephila species differs from that of (cox1 < nad1 < cox2 < nad5 < cob < cox3 < nad4 < atp6 < nad4L < nad3 < nad2 < nad6 < atp8) reported for 17 spider mitogenomes20. The cox1 gene with the lowest Ka/Ks ratio in spider mitogenomes, representing fewer changes in amino acids, supports its use as a molecular marker for species differentiation and DNA barcoding33,34.

Of the two rRNA genes in Nephila and Trichonephila mitogenomes, rrnS is much shorter, ranging from 693 bp in N. pilipes to 702 bp in T. antipodiana, while rrnL ranges from 1042 bp in T. antipodiana to 1050 bp in T. vitiana (Table 1, Table S2). As in other araneid spiders, rrnL is located between trnL1 and trnV and rrnS between trnV and trnQ (Fig. 1; Fig. S1).

Most spiders have longer rrnL than rrnS gene: Tet. maxillosa and Tet. nitens16; C. triviale and D. silvatica21; E. coreana28; W. fidelis18; A. perforata14; L. crotalus20; E. tricuspidata19, and A. aquatica25. Some spiders have similar length for rrnL and rrnS: for example, the length of rrnL and rrnS is the same (1722 bp) in N. nautica and N. doenitzi31.

Two tRNAs (trnA, trnS2) do not have DHU arm in all the Nephila and Trichonephila mitogenomes. Other tRNAs without DHU arm are: trnR in N. pilipes; and trnS1 and trnT in T. clavata. The complete loss of DHU loop involves trnQ in N. pilipes, trnN and trnV in T. antipodiana and T. clavata, and trnV in T. vitiana (Fig. 4).

The A + T content of the control region of Nephila and Trichonephila mitogenomes is AT-rich (Table 2), with negative AT skewness value in T. antipodiana and positive values in N. pilipes, T. vitiana and T. clavata (Table S3). The GC skewness value is positive for all four mitogenomes.

An early study based on one nuclear (18S) and two mitochondrial (COXI and 16S) markers revealed that N. pilipes and N. constricta Karsch, 1879 formed a clade that was sister to all other Nephila species37. This finding was supported by molecular phylogenetic study based on three nuclear and five mitochondrial genes which indicated that the genus Nephila was diphyletic, with true Nephila (containing N. pilipes and N. constricta) and the other species (now genus Trichonephila according to Kuntner et al.1) being sister to the genus Clitaetra Simon, 188938. Large genetic difference (Fixed Differences, FD = 80%) between N. pilipes and other Nephila (now Trichonephila) species [N. edulis (Labillardière), N. plumipes (Latreille, 1804) and N. tetragnathoides (Walckenaer, 1841)] in Australasia had also been reported based on allozyme data4.

Araneinae does not form a monophyletic group, with the genus Cyclosa being basal to the other Araneinae genera (Araneus, Hypsosinga and Neoscona), as well as the monophyletic subfamilies Argiopinae and Cyrtophorinae (Fig. 6; Fig. S2). Argiopinae and Cyrtophorinae form a lineage distinct from the Araneinae lineages comprising Neoscona and (Araneus–Hypsosinga), Cyrtarachninae is basal to the above araneid subfamilies. A large, representative taxonomic sampling is needed to reconstruct a robust phylogeny.

Both the BI and ML trees based on two rRNA (rrnL and rrnS) sequences reveal identical clades as 15 mt-genes and 13 PCGs (Fig. 6; Fig. S2). However, the genera Araneus and Argiope do not form monophyletic lineages, and the genus Cyclosa is the most basal genus to the other araneid genera. This result indicates that the rRNA genes alone are not suitable for reconstructing phylogeny at the higher taxonomic level.

In a recent study based on 13 protein-coding genes of the complete mitogenome, Nephilidae (represented by T. clavata) is basal to the family Araneidae19. Our present study, with the inclusion of N. pilipes, T. antipodiana and T. vitiana (previously N. vitiana) as well as T. clavata and additional recently published mitogenomes of Araneidae supports the Nephila–Trichonephila clade being basal to other araneid subfamilies (Fig. 6; Fig. S2). The close affinity of T. vitiana with T. antipodiana and T. clavata indicates that it is a member of the genus Trichonephila and not Nephila as currently recognized2.

Studies based on morphological data and mitochondrial and nuclear gene sequences have indicated closer relationship of T. antipodiana with T. clavata than with N. pilipes37,38,39. Based on anchored hybrid enrichment (AHE) targeted-sequencing approach with 585 single copy orthologous loci, the genus Nephila is basal to the genera Herennia Thorell, 1877, Nephilengys L. Koch, 1872, Nephilingis Kuntner, 2013, Trichonephila and Clitaetra1. The genus Clitaetra is basal to the genera Herennia, Nephilengys, Nephilingis, and Trichonephila.