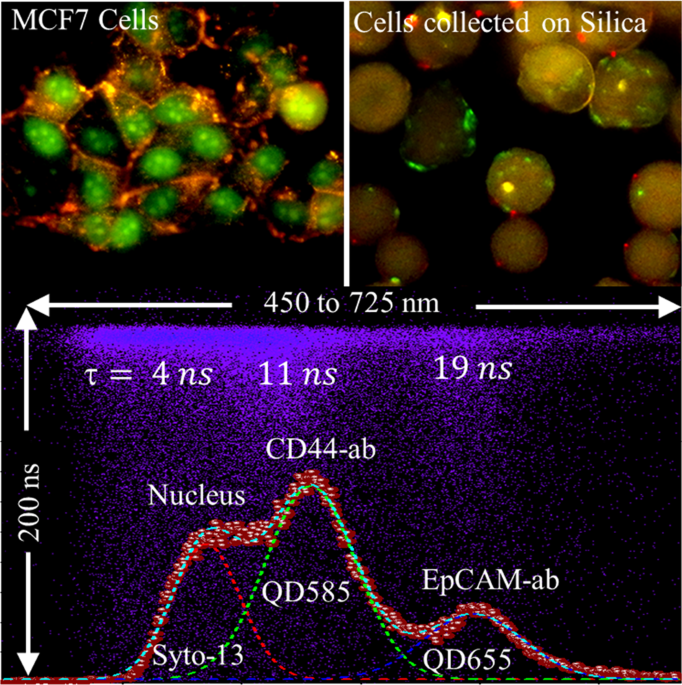 Determination of CD44 and EpCAM antigen levels in MCF7 cells

We examined the labeling efficiency of MCF7 cells, the most common breast cancer cells, with anti-CD44 ab and anti-EpCAM ab43. Briefly, cultured MCF7 cells were labeled by incubation with Syto-13 nucleus-staining dye, QD585-anti-CD44 ab, and QD655-anti-EpCAM ab. The details of the cell culture condition, ab conjugate preparation, and cell labeling process are presented in the experimental section. Figure 1A shows a fluorescence image of the immunostained cells excited at 465 nm and measured with a 480-nm longpass filter. Here, the number of CD44 and EpCAM antigens expressed on the cell surface was determined by time-resolved fluorescence photon counting. The photons emitted from the triply stained cells were identified using a spectrometer-streak camera system.

The EMT transition causes MCF7 cells to acquire stem-like properties, such as overexpression of the stem cell marker CD4442. The spectral fingerprints and three fluorescence decay data helped us determine the EpCAM and CD44 ratios in this cell line. Considering the comparable fluorescence quantum efficiencies of QD585 and QD655 (approximately 0.8) and using equimolar QD-labeled abs, we found that the expression of the CD44 antigen in MCF7 cells was 4-fold greater than that of EpCAM. This difference was identified by comparing the integrated photocounts of QD585-anti-CD44 ab (20488 photons) and QD655-anti-EpCAM ab (5367 photons) (Fig. 1B). The higher photocount at ~585 nm suggested that CD44 is better than EpCAM for capturing MCF7 cells in a blood sample. Nevertheless, if the energy transfer from QD585 to QD655 is significant, the number of photons counted at ~585 nm (QD585-anti-CD44 ab) is less than the true number. In this case, the expression level of CD44 estimated is more accurate than the estimated value.

We prepared immunosilica microparticles to collect and characterize cancer cells in a blood sample. In addition, we prepared anti-CD44 ab and anti-EGFR ab by biotinylation and stabilized them in PBS. The anti-CD44 ab was tethered to streptavidin-conjugated silica microparticles and purified by repeated washing and gravity separation. The immunosilica particle preparation and cancer cell collection procedures are shown in Fig. 2A, and the related details are presented in the experimental section. Cancer cells from the PBMC or T cells in a blood sample were isolated by gravity separation facilitated by the large size (75 ~ 150 µm) and high specific gravity (~2.2 g/ml) of the silica particles. The sedimentation coefficient of the silica is significantly higher than that of cells due to the difference (approximately. 1.2 kg m−3) in the specific gravities of PBS and silica, allowing gravity separation of the particles in seconds.

Furthermore, the use of large silica particles helped us prevent endocytosis of silica and magnetic nanoparticles by cells, which is common to traditional CTC isolation. In addition to conjugating anti-CD44-ab to silica particles, we treated a blood sample with a QD585-CD44-ab-blocking solution. Here, the low concentration (6 nM) of QD-ab-labeled conjugate led to the identification of only a portion of CD44 antigens on MCF7 cells, leaving a large portion of the antigens unblocked for cell capture using anti-CD44-ab-conjugated silica particles. We confirmed the presence of excess CD44 antigen by performing a control experiment in which MCF7 cells were labeled with two different concentrations (6 nM and 30 nM) of QD585-anti-CD44-ab solution. After washing the cells, we determined the fluorescence photocounts from an equal number of cells in the samples labeled with 6 nM or 30 nM QD-ab conjugates. The integrated photocounts determined from the streak camera images showed that <30% of CD44 antigens were labeled with a 6 nM conjugate solution. The corresponding fluorescence spectra of different parts of each sample are shown in Fig. S3. The photocount ratios suggest that 60% or more of the CD44 antigens remained intact for potential binding to silica particles.

In the aforementioned method, a mixture of PBMCs and MCF7 cells was prelabeled with the nuclear staining dyes Syto-13, QD585-anti-CD44 ab, and QD655-anti-EpCAM ab. The stained cells suspended in PBS were mixed with anti-CD44-ab-conjugated silica particles, and the MCF7 cells were isolated by gentle mixing of the sample. The silica particles were allowed to settle under gravity in a “natural gravity-mediated enrichment” method. The cancer cells attached to the silica particles were characterized by microspectroscopy. Figure 2B shows a fluorescence image of MCF7 cells attached to anti-CD44-ab-conjugated silica particles, and the corresponding single-photon histogram is shown in Fig. 2C. We deconvoluted the histogram data to obtain a triply degerate fluorescence spectrum (Fig. 2C), and three decay curves (Fig. 2D, E). The characteristic fluorescence spectral maxima (515, 585, and 655 nm) correspond to stained nuclei (Syto-13 dye), CD44 (the QD585-anti-CD44 ab conjugate), and EpCAM (the QD655-anti-EpCAM ab conjugate). Additionally, the decay profiles with the characteristic fluorescence lifetimes of Syto-13, QD585, and QD655 confirmed the attachment of MCF7 cells to the silica particles. The detection of 1–10 cells from 100 MCF7 cells in a 1 mL blood sample was achieved, with the PBMC count consistently maintained at 105. Interestingly, by using anti-CD44 ab to collect MCF7 cells, we avoided the nonspecific adsorption of PBMCs onto silica particles. Only a few PBMCs were nonspecifically attached, as indicated by only the green emission of Syto-13 detected. Thus, we distinguished nonspecifically attached PBMCs from MCF7 cells based on the lack of orange and red fluorescence in the fluorescence images and streak camera histograms. In contrast, multicolor imaging supplemented by spectral and lifetime data helped us identify MCF7 cells.

Estimation of CD44 and EpCAM antigen levels in HeLa cells

To confirm that EMT antigen-specific cancer cells were collected and characterized, we chose HeLa cells in which the expression of epithelial (EpCAM) antigens was downregulated44 and that of EMT-specific CD44 was upregulated. Similar to the labeling procedure used with MCF7 cells, HeLa cells cultured on a tissue culture plate or in a blood sample with the Syto-13 dye, QD585-anti-CD44 ab, and QD655-anti-EpCAM ab were labeled. Figure 3 shows the fluorescence image (3 A) and the temporally and spectrally resolved photocounts (3B) of HeLa cells. In this experiment, we did not detect QD655-EpCAM-ab fluorescence, indicating the poor expression of EpCAM by HeLa cells. Figure 3D shows the fluorescence image of HeLa cells attached to the anti-CD44-ab-conjugated silica particles. First, we treated HeLa cells and PBMCs in a blood sample with Syto-13 dye, a QD585-anti-CD44-ab conjugate, and a QD655-anti-EpCAM-ab conjugate. Then, anti-CD44-ab-functionalized silica particles were added to the blood sample, and HeLa cells were selectively attached to the silica particles by gentle up and down mixing of the sample. The bimodal fluorescence spectrum (Fig. 3C) of the silica particles showing the spectral characteristics of Syto-13 and QD585 and the corresponding fluorescence lifetimes (Fig. S4) confirmed the selective capture of HeLa cells.

The advantage of CD44-targeted CTC collection

To increase the modality of cancer cell detection and minimize false-positive results due to nonspecific adsorption of PBMCs onto silica particles, we used silica particles modified with an anti-EGFR ab. We treated HeLa cells and PBMCs in a blood sample with Syto-25 dye, a QD655-anti-EpCAM-ab conjugate, and an AlexaFluor488-anti-CD44-ab conjugate. In this experiment, the anti-EGFR ab was chosen because EGFR is overexpressed in various cancer cells, indicating that is an alternative biomarker for non-EpCAM-enriched CTCs. Figure 4A shows the fluorescence image of HeLa cells attached to the anti-EGFR-ab-conjugated silica particles. The green-only fluorescence spots in Fig. 4A represent PBMCs attached to silica particles. Undesired binding of PBMCs to anti-EGFR-ab-silica particles is not surprising because of the overexpression of EGFR on PBMCs and T cells12. Figure S5 shows the corresponding single-photon histogram based on the fluorescence spectrum and decay curve characteristic of Syto-25, confirming the capture of PBMCs. In contrast, anti-CD44-ab-conjugated silica particles were ideal for the selective isolation and detection of MCF7 (Fig. 2) and HeLa (Fig. 3) cells.

To verify the collection and detection of cancer cells using anti-EGFR-ab, we chose H1650 cells that upregulate EGFR45. We labeled H1650 and T cells (model blood cells) with Syto-25 dye alone and treated the cell samples with anti-EGFR-ab-conjugated silica particles. Figure 4B–D presents the immunofluorescence images of H1650 cells on silica particles collected from samples with different H1650 and T cell ratios. Figure 4D, which shows a sample with 106 T cells/mL but no H1650 cells, indicates many T cells bound to the immunosilica microparticles. Although EGFR overexpression in many cancer cells46 promises anti-EGFR-ab for their collection, blood cells expressing EGFR interfere with the process. Therefore, the anti-CD44 ab is more promising than the anti-EGFR ab. In contrast, stem cell biomarkers such as CD44 and multiple fluorescence labeling are error-free detection methods for CTC collection and detection. The study presented demonstrates the technical benefits of using mesenchymal biomarkers, spectrally and temporally resolved modalities, and the self-segregating immunosilica particles for CTC detection.