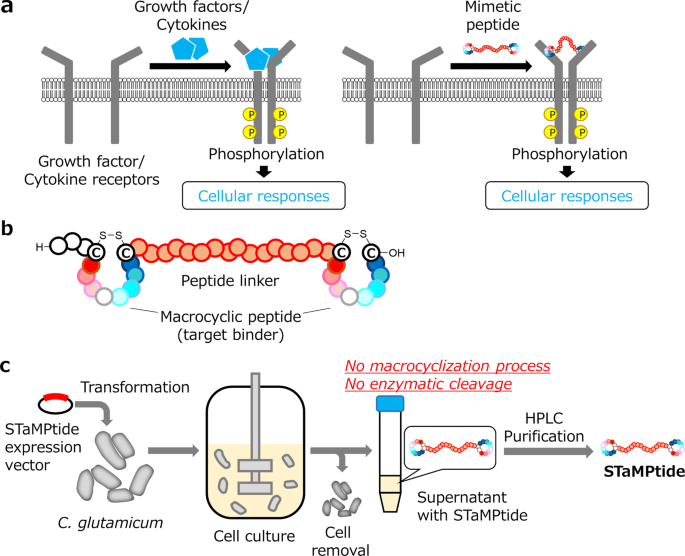 STaMPtides were expressed by C. glutamicum, as previously described. Briefly, STaMPtides with the C. glutamicum ATCC13869-derived CspB signal peptide were encoded downstream of the ATCC13869-derived cspB gene promoter in the pPK4 expression vector48. The constructed expression vectors were transformed into the C. glutamicum YPS010 strain49. The transformed cells were cultured in MMTG liquid medium supplemented with 25 mg/L of kanamycin at 30 °C for 72 h. Next, 6.5 μL of the supernatant was analyzed by reduced SDS-PAGE using NuPAGE 12% Bis-Tris Gel (Thermo Fisher Scientific) and Quick-CBB (Wako Pure Chemical Industries). The supernatant was decellularized by filtering through an SLGV033RS Hydrophilic PVDF Millex-GV Filter Unit (Merck Millipore, Burlington, MA, USA).

The molecular masses and yield of STaMPtides were measured by LC–MS using ACQUITY UPLC H-Class/SQD2 (Waters Corporation) under linear gradient conditions with mobile phases A (water with 0.1% TFA) and B (80% acetonitrile, 19.9% water, and 0.1% TFA in acetonitrile). The yields of STaMPtides were calculated by comparing their peak areas in culture broth concentrated by Amicon Ultra 3 kDa (Merck) five times with that of the 0.2 mg/mL bovine serum albumin standard. All the purified STaMPtides were confirmed to have >95% purity.

Each sample of 0.5 µg was diluted with 50 mM ammonium acetate (pH 6.6 for thermolysin digestion) or KCl-HCl (pH 1.5, for ProAlanase digestion) to form 30 µL aliquots. For thermolysin digestion, 200 ng of thermolysin was added and incubated for 3 h at 65 °C. To quench the digestion, 20% TFA was added to the final concentration of 0.5%. For ProAlanase digestion, 20 ng of ProAlanase was added and incubated for 2 h at 37 °C. To quench the digestion, samples were heated up to 95 °C for 10 min. LC–MS/MS analysis was carried out using Easy-nLC 1000 (Thermo Fisher Scientific) connected to Orbitrap Fusion Tribrid (Thermo Fisher Scientific). Acclaim PepMap® 100 (75 µm × 2 cm, Thermo Fischer Scientific), and electrospray ionization (ESI) (75 μm × 12.5 cm, 3 μm, NTCC-360/75-3-125; Nikkyo Technos) columns were used for as trap and analytical columns, respectively. The total 59.5 min gradient program was as follows; 0.5 min hold at 2% mobile phase B (0.1% formic acid in acetonitrile), 49.5 min linear gradient from 2% to 50% mobile phase B, 5.5 min hold at 50% mobile phase B, followed by an increase to 95% mobile phase B in 1 min, and 3 min hold. Mobile phase A was a 0.1% formic acid, and the flow rate was set to 300 nL/min. MS analysis was carried out in data-dependent acquisition mode with full scan from m/z 350–2000. The spray voltage and ion transfer tube temperature were set to 1600 V and 275 °C, respectively. The mass resolution of MS1 was 120,000, and collision-induced dissociation was used to acquire MS2 spectra. The maximum injection time for MS1 and MS2 was set to 50 ms, and the top speed mode with 3 s cycles for MS/MS analysis was selected. The resulting MS/MS data were analyzed using Xcalibur (Thermo Fisher Scientific). MS/MS spectrum data were applied to confirm the amino acid sequence and increase identification accuracy.

The Met-activating ability of HGF mimetic STaMPtides was evaluated by SRE reporter assay using the SRE reporter vector (QIAGEN, Hilden, Germany) according to the manufacturer’s instructions. Briefly, 1 μL of the SRE reporter vector was mixed with 0.6 μL of Attractene Transfection Reagent (QIAGEN) in 50 μL of Opti-MEM medium (Thermo Fisher Scientific) to form a transfection complex. Next, HEK293 cells at a density of 40,000 cells/well were seeded on 96-well cell culture plates with the transfection complex and incubated overnight in 5% CO2 at 37 °C. The cells were starved with Opti-MEM containing 0.5% FBS, 1% non-essential amino acid solution, and penicillin-streptomycin and incubated at 37 °C for 4 h. Next, the cells were stimulated by rhHGF, purified HGF mimetic STaMPtides, monomeric aMD4dY, or decellularized supernatant overnight in a 5% CO2 incubator at 37 °C. The signal intensity was detected using the dual-luciferase reporter assay system (Promega Corporation) and a Nivo plate reader (PerkinElmer, Inc., Waltham, MA, USA). Reporter activity was calculated as (luminescence intensity of Firefly luciferase)/(luminescence intensity of Renilla luciferase) and normalized by that without a stimulant in order to determine the relative reporter activity.

The phosphorylation level of Met was evaluated according to a previously reported method6,32, with slight modifications. In brief, HuCCT-1 cells at a density of 10,000 cells/well were seeded on 96-well cell culture plates and incubated overnight in 5% CO2 at 37 °C. The cells were stimulated by rhHGF, purified HGF mimetic STaMPtides, and monomeric aMD4dY for 10 min in a 5% CO2 incubator at 37 °C. Next, cells were fixed using 4% paraformaldehyde in phosphate-buffered saline (PBS) for 20 min. Cells were washed three times with PBS and blocked with 1% BSA and 0.02% Triton X-100 in PBS for 30 min at room temperature. Cells were incubated with 1:1000 diluted phospho-Met (Tyr1234/1235) (D26) XP Rabbit mAb (Cell Signaling Technology) supplemented with 1% BSA in PBS at 4 °C overnight. After washing three times with PBS, the cells were incubated with 1:1000 diluted anti-mouse HRP-linked IgG antibody (Cell Signaling Technology) supplemented with 1% BSA in PBS at room temperature for 3 h. Cells were washed four times with PBS and incubated with 100 μL TMB substrate for 30 min. The reaction was stopped with an equal volume of 0.2 N sulfuric acid, and absorbance was quantified at 450 nm by the Molecular Imager ChemiDoc XRS System (Bio-Rad).

The activity of aMD4dY-PA22 against HuCCT1 cell and BM-hMSC proliferation was evaluated. HuCCT1 cells at a density of 5000 cells/well were seeded on a 24-well cell culture plate with RPMI 1640 medium supplemented with 5% FBS with or without 0.44 nM rhHGF or 6.3 nM aMD4dY-PA22. After 5 days of culture in 5% CO2 at 37 °C, the cells were detached by 0.25% trypsin/ethylenediaminetetraacetic acid (EDTA; Thermo Fisher Scientific) and counted using a Countess automated cell counter (Thermo Fisher Scientific).

BM-hMSC cells at a density of 2500 cells/well were seeded on a 96-well cell culture plate with DMEM supplemented with 10% FBS with or without 1.3 nM rhHGF or 32 nM aMD4dY-PA22. After 3 days of culture in 5% CO2 at 37 °C, Cell Counting Reagent SF (Dojindo Laboratories, Japan) was added to the cells. After 1 h incubation, cell numbers were quantified by detection of absorbance at 450 nm using the Benchmark Plus plate reader (Bio-Rad Laboratories, Hercules, CA, USA).

HuCCT1 cells at a density of 20,000 cells/well in RPMI 1640 medium supplemented with 0.5% FBS were added to 24-well Transwell inserts. In the lower layer, RPMI 1640 supplemented with 0.5% FBS with or without 1.3 nM rhHGF or 32 nM aMD4dY-PA22 was added. The cells were incubated for 24 h in 5% CO2 at 37 °C. The Transwell inserts were washed thrice with PBS, stained with 0.5% crystal violet (Nacalai Tesque)/methanol for 10 min, and washed with distilled water. Images of migrated cells were captured using BZ-X fluorescence microscopy (Keyence Corporation, Osaka, Japan), and cell migration levels were quantified by stained areas of the Transwell inserts.

HuCCT1 cells at a density of 20,000 cells/well were mixed with 400 μL of ice-cold collagen-containing culture medium (DMEM/Nutrient Mixture F-12, CellMatrix type IA [Nitta Gelatin Inc., Osaka, Japan], 2.2 g/L of sodium bicarbonate, 4.77 g/L of 4-(2-hydroxyethyl)-1-piperazineethanesulfonic acid [HEPES], and 0.005 N sodium hydroxide) and incubated in a 48-well cell culture plate in 5% CO2 at 37 °C for gelation. The cells encapsulated in the collagen gel were cultured with 500 μL of RPMI 1640 medium supplemented with 10% FBS with or without 0.44 nM HGF or 6.3 nM aMD4dY-PA22 in 5% CO2 at 37 °C. The culture medium was changed every 3 days. At day 7, the cells were observed by inverted microscopy.

Agonistic activity against EPOR was assessed using the PathHunter® eXpress EpoR-JAK2 Functional Assay Kit (DiscoverX) according to the manufacturer’s instructions. Briefly, cells were seeded on a 96-well cell culture plate and incubated overnight in 5% CO2 at 37 °C. Serially diluted rhEPO, EPO mimetic STaMPtides, monomeric EMP35 peptide, or a STaMPtide-containing decellularized supernatant was added to the cells and incubated at room temperature for 3 h to stimulate the cells. The cells were lysed with a substrate reagent, and chemiluminescence was detected using a Nivo plate reader (PerkinElmer).

Here, 800,000 hPBMCs were suspended in 400 μL of Iscove’s modified Dulbecco’s medium (Thermo Fisher Scientific) supplemented with 2% FBS and thoroughly mixed with 4 mL of MethoCult™ H4035 Optimum Without EPO (STEMCELL Technologies Inc., Vancouver, Canada) with or without 0.54 nM rhEPO or 1.6–16 nM EMP-PA22. Next, 1.1 mL of the mixture was seeded in a 6-well cell culture plate and cultured for 13 days in 5% CO2 at 37 °C. At day 13, colony numbers were counted, and images were taken by inverted microscopy and BZ-X fluorescence microscopy.

Here, 100,000 HEL cells were seeded on a 96-well cell culture plate in RPMI 1640 medium and incubated overnight for starvation. The starved cells were stimulated by rhTPO or TMP-PA8 for 20 min, rinsed once with PBS, and lysed with lysis buffer 17 supplemented with a protease inhibitor cocktail. The phosphorylation level of CREB was assessed using phospho-CREB (Ser133) and the Total CREB ELISA kit (RayBio) according to the manufacturer’s instructions. The amounts of phospho-CREB and total CREB were quantified by measuring absorbance at 450 nm, and the phospho-CREB level was calculated as (absorbance of pCREB)/(absorbance of total CREB).

Computational analysis was performed using the Bioluminate software suite version 2020-3 (Schrödinger, Inc., New York, NY, USA). The crystal structure of EPOR was retrieved from the Protein Data Bank (PDB: 1EBP) as a complex with EMP1. Prime software was used to build each homology model of the peginesatide core and EMP-PA22 by using EMP1 as a template50,51. The modeling structures of the EPOR–peginesatide core and EPOR-EMP-PA22 were constructed by replacing EMP1 with a peginesatide core and EMP-PA22 in EPOR-EMP1. MD simulations were performed thrice for each structure with an NPT ensemble for 100 ns at 310 K and 1.01325 bar using Desmond software52.